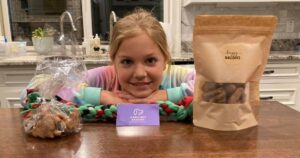 Animal shelters across the country rely on donations and fundraisers to support the animals in their care. The Virginia Beach SPCA is one of many shelters always in need of donations, making this young girl’s efforts so admirable!

An animal lover named Caroline has made it her mission to give back to the animals of her community. After discovering her passion for baking dog treats for furry friends, she knew she could turn this hobby into a special way to give back.

Caroline’s charity work began in 2020 in the midst of the pandemic. The Virginia Beach SPCA was one of many organizations struggling to raise funds, leading to creative charity efforts around their community.

The impressive 9-year-old already had a special dog treat recipe that pups seemed to love, so she began to brainstorm how she could use her baking skills to make a difference. That’s when Caroline’s Barkery was officially born, paving the way for the incredible work that was to come.

“She’s been passionate about animals almost her whole life. Now she’s able to help use this fundraiser to fuel her passion.” – Missy, Caroline’s mom

Caroline began baking large batches of dog treats for interested buyers, selling large bags for $10 and half-sized bags for $5. Within weeks her charity was overrun with orders, proving just how incredible of an idea this was! By the end of 2020, she had raised a total of $946 for her local SPCA.

Word of her delicious dog treats began to spread, and fur parents around her community lined up for a chance to snag a bag of their own. Not only did the people of her community begin to take notice, but the rest of the country did as well. Before they knew it, the AKC caught wind of Caroline’s charity work.

Each year the AKC offers a “Canine and Me” award to a passionate animal advocate that is fighting to make a difference. With her tireless work to support her favorite shelter, it’s clear why she was chosen as the 2021 winner.

“She was the recipient of the Community Achievement Award which was given to the person that they felt showed commitment and passion through fundraising and contributing to their community for the welfare of dogs.” Caroline’s Barkery FB

From the moment she began her charity, Caroline always had a goal of hitting the $1,000 mark in funds. It’s safe to say that she absolutely crushed it this year, as she surpassed her goal with over $2,000 in purchases.

“That goal of $1,000 was crushed! Thank you to everyone who has ordered and supported Caroline this year. Carolines Barkery has raised $2,013.60 for the Virginia Beach SPCA!!” – Caroline’s Barkery FB

We have no doubt that Caroline will continue to surpass her charity goals going forward, and that she will ultimately make a massive difference in this world. You go, Caroline!