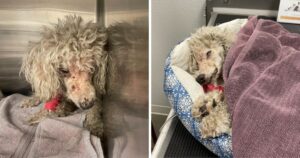 A team of dedicated animal rescuers is working around the clock to care for a senior poodle that was a victim of unimaginable abuse. After being found in a desperate state by a good Samaritan, Petal is now at a local animal hospital, fighting for her life.

The good Samaritan was driving down the road when she passed what looked like a stuffed animal coming out of a clear plastic bag. After pulling over to investigate further, she was horrified by what she discovered.

Laying next to a plastic bag was a malnourished Poodle sprawled on the hot summer cement. Her mouth was taped shut with duct tape, along with each of her legs being tied together. Though she was not found inside the plastic bag, the rescue believes she had already wiggled herself out by the time she was discovered.

Once the good Samaritan realized the gravity of the situation, she immediately jumped into action to save the dog’s life. She ran into a local business asking for scissors to cut the dog free, and called the local animal control to inform them of the situation. Soon after, Poodle and Pooch Rescue stepped in to offer their skilled assistance.

“This wasn’t even just throwing the dog away, this was torture.” – Rebecca Lynch, President of Poodle and Pooch Rescue

Rebecca Lynch of Poodle and Pooch Rescue stepped in and arranged for the pup to be transferred to the care of the East Orlando Animal Hospital. According to Dr. Peters, the abused pup was severely dehydrated, malnourished, anemic, and battling an infection in both eyes. After being lovingly named Petal, the team got to work on saving this sweet girl’s life.

“She was so weak she was unable to stand on her own. She is on four times/day feedings and she’s been ravenous, but needs to be fed slowly in several feedings so she doesn’t get sick. Every hour she has been improving but is still not out of the woods yet.” – Rebecca Lynch, President of Poodle and Pooch Rescue

Petal has been receiving care at the animal hospital for about 2 weeks now and is said to be improving by the day. A recent video shows her walking through their yard with the help of a vet tech offering her back-end support with each step she takes. She has yet to muster the strength to use her rear legs on her own, but she is certainly giving it all she’s got.

The team at the animal hospital is unsure if her back legs are weak due to neurological issues or muscle atrophy, but they hope it will become clearer as time passes. Petal has a team of dedicated animal advocates on her side, along with the support of animal lovers around the country.

Petal is not yet strong enough to be adopted, but the team at Poodle and Pooch Rescue urges any interested adopters to keep up with her journey. The rescue has promised to offer updates as they come, so we suggest following along and supporting their efforts.

“A human tortured her and we want to show her that not all humans are bad. This is why we do what we do to save dogs in need in the Central Florida area.” – Rebecca Lynch, President of Poodle and Pooch Rescue

An open animal cruelty investigation is underway with Orange County Animal Services and a $2,500 reward for information leading to an arrest. Police urge you to email JusticeForPetal@gmail.com with any information on Petal’s case and to keep an ear open for any potential leads if you are in the area.

The post A Senior Poodle Named Petal Is Clinging To Life After Horrific Abuse appeared first on iHeartDogs.com.