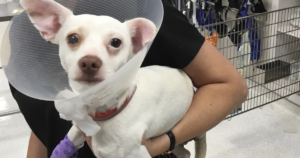 When working the night shift at a gym in Randolph, Massachusetts, Eric Weloth never expected to save a dog’s life. Yet, at 1 am, he found a Chihuahua mix abandoned and abused in a parking lot. When officials took the small dog in, they realized they’d have to amputate his back leg. It was a serious and scary procedure for the pup, but he’s lucky someone found him in time. Otherwise, he might not have survived.

Officers are on the lookout for information about what happened to this innocent dog. It’s hard to imagine why anyone would purposely hurt him.

Weloth knew he couldn’t leave the dog alone in the dark, especially with a high chance of rain. The dog was resting next to a crate and a red blanket, which he seemed to be clinging to.

There aren’t any animal control officers in Randolph, so a police officer arrived at the scene. They helped Weloth coax the dog back into the crate with food. As the dog moved around in the crate, it was clear that something was wrong.

“He couldn’t put weight on his leg. He was moving around in his crate very funny,” Weloth said. “We saw the dog and we were just thinking: ‘This is not good. No one’s here for him.’ He was clearly just dropped off.”

Weloth kept the dog at his home until animal control opened in the morning. After a long, confusing night, the dog headed to Norfolk Massachusetts Animal Control and Shelter. They named him Skippy.

The Road to Recovery

Right away, animal control officer Hilary Cohen determined that Skippy’s rear leg was shattered. So, they had no choice but to amputate his leg. He was likely dealing with the shattered leg for as long as several weeks. Now, he’s down to three legs and resting comfortably.

“I see a light in his eyes now,” Weloth said. “He looked like he was in a lot of pain the whole time he was with me.”

Everyone at the shelter has already fallen in love with Skippy, especially the vets. So, they’re sure he will have no problem finding a forever home in the future. He’s not up for adoption yet because he still has a few weeks of healing to do.

If anyone recognizes Skippy or knows any information about his past, they’re urged to contact the Randolph Police at 781-963-1212 or Norfolk Animal Control at 508-528-3232, option 7. The shelter also reminds everyone that if they’re unable to properly care for their dog, they should contact their local shelter or rescue to find resources to help them.