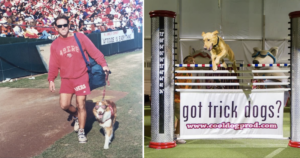 However, before Mack began this crazy adventure, his life was far different from what it is now. One lovable Australian Shepherd named Scooter quickly sent his life in a new direction. Now, he couldn’t be happier about his dog-oriented life. But it’s something he never would’ve expected.

It All Began with One Special Dog

Before Mack began his dog show, he worked as a full-time general contractor. Yet, when he adopted Scooter, his life plans suddenly changed. The Australian Shepherd was born to be a star. He was very intelligent and fast, catching frisbees at record speeds.

“It just so happened to be, he tried to be the greatest performing Frisbee dog of all time,” Mack said. “He became the San Fransisco 49er mascot for about seven or eight years, we traveled with the team.”

Mack and Scooter traveled around the globe, and the talented dog even won two world titles. With the publicity from the 49ers, Scooter’s work gained a lot of attention. Before long, Mack was getting phone calls asking him to set up a dog show with Scooter. So, he started his agility dog show soon after.

Working with the dogs became so time-consuming that Mack quit his contracting job. The first few years of the dog show were tough, but Mack eventually got the hang of it, and it took off.

Now, the dog show has become a regular part of Mack’s life. He has several dogs who participate in the shows, and they’re all rescues who love to use their excess energy to complete unique tricks. Some tricks include jump roping, handstands, and hurdles.

As cool as these tricks are, Mack also hopes the show encourages more people to adopt dogs in need. After all, he has shown that shelter dogs can be just as obedient and loving as any other dog.

“There’s a lot of dogs in the shelters, man, so we encourage folks to go down there but, do your homework,” Mack said. “And we always encourage people to bring a dog in that suits your best lifestyle you know, your working lifestyle, your family lifestyle. If you’re a real active family, you know, get a Border Collie, an Australian Shepherd, you know, something that’s active.”

The show is always traveling to new locations, with its most recent stop being the Nebraska State Fair. Mack’s performing dogs get a lot of love when they’re not doing tricks, and they seem to love all the extra attention they get.

Watch a Clip of the Dog Show Here: