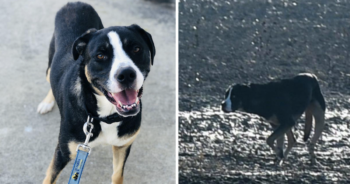 After getting adopted from It Takes a Village No-Kill Rescue in Evansville, Indiana, a dog named Allie ran off. She was terrified of all people, even the ones she knew. So, she jumped into the Ohio River to get as far away from humans as possible. She crossed the massive river on her own, refusing to let anyone help her. But animal lovers wanted to show her that humans can be kind.

After exiting the river, it took a week for rescuers to coax Allie toward them. The exhausted pup wasn’t eager to approach people, but she eventually let them save her.

An Hour of Relentless Swimming

In an hour, Allie swam 3,300 feet to cross the Ohio River. Police officers, firefighters, and animal control workers tried to help the pup out of the river, but Allie stayed as far away from them as possible. She went under the water several times and almost got hit by a barge in the process.

Allie reached the other side of the river on her own, and she ended up in Henderson County, Kentucky. Right away, she ran into a wooded area. Rescuers spent a week locating her using drones, traps, cameras, and trained dogs. Anytime someone approached her, she only ran away further, so the rescue mission took incredible amounts of patience.

Finally, rescuers got Allie into a field, where they spent six hours trying to coax her with the help of a few dogs. While Allie was in the field, they were able to fence her in and rescue her. Allie was terrified, but good things were ahead of her. Dog trainer Michelle Phillips offered to care for Allie for the time being and work on her training.

“We just brought her home and she went and laid down on our couch,” Phillips said. “I don’t think she moved much that first night, we just let her be. She was extremely fearful of people, dog leashes, and just scared.”

Allie ended up not returning to her old family. Instead, she stayed with Phillips for months as she learned new skills and began to trust humans more. Phillips’ initial intentions were to prepare Allie for a new family. But then, the dog trainer quickly fell in love with her and adopted her a year after her rescue.

“I really decided quite early on that she wasn’t going anywhere,” Phillips said. “I believe dogs are family and mine have a good life, every dog deserves a loving home and a chance. I could not stand to put her through anything more so I really thought, what better time than the year ‘anniversary’ of finding her?”

Since her adventure across the river, the rescued dog has come a long way. Now, she doesn’t run away, even if she’s off-leash in Phillips’ yard. She’s learning that humans aren’t as scary as she once thought. She moved from home to home in the past. Now, she’s found a family that’s willing to love her forever. She’s happy, healthy, and there to stay!

The post After Getting Tossed From Home To Home, It Didn’t Look Like This Poor Pup Would Ever Trust Again. appeared first on iHeartDogs.com.