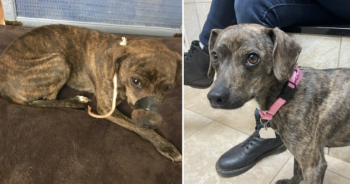 Miss Brighteyes was named for her bright and expressive face, but she wasn’t always this positive. The innocent pup was a victim of abuse before McKamey Animal Center saved her. Rescuers found her with electrical tape around her mouth and a rope around her neck. She would’ve suffered major injuries if she hadn’t been spotted so quickly.

But now that Miss Brighteyes is receiving lots of love, she’s opening up more and experiencing joy. It only took her a week to get comfortable in her foster home, so she has a future just as bright as her expressions. Yet, dog lovers are still desperately searching for the person who hurt her.

The mixed breed pup was found all alone on January 30th, 2022. She had electrical tape tied extremely tight around her snout so she couldn’t open her mouth to eat or cry for help. She also had a twine rope secured around her neck.

At first, Miss Brighteyes was understandably nervous and stressed out, but once the tape and rope were gone, she was able to show her true personality. The shelter is begging for answers about the pup’s abuser, and they’re offering a $4,500 reward for information that leads to an arrest.

Jess Leach is currently fostering Miss Brighteyes. The little dog isn’t adoptable yet due to the ongoing investigation.

“She’s a perfect angel. I don’t understand how anyone could treat an animal like that,” said Leach.

Luckily, Miss Brighteyes had minimal health concerns. She didn’t have severe swelling or permanent tissue damage, so she’s lucky that someone found her early on. After spending a week in foster care, she’s already acting comfortable around the humans and dogs in the home.

“Her eyes are very bright and expressive,” said Leach. “Even when my daughter is crying, Miss Brighteyes is just interested in making sure she’s okay.”

Leach said that Miss Brighteyes is being spoiled in her foster home. She gets to relax on the couch for most of the day, which is something Leach thinks she’s never gotten to do before. The shelter guesses that the pup is between one and three years old, so she might’ve spent her whole past in a neglectful home.

If you know anything about this sweet dog, please reach out to 423-305-6500 x153 or directorofanimalservices@mckameyanimalcenter.org. Miss Brighteyes deserves justice for the horrible abuse she endured. If you want to help out in other ways, you can donate money to the reward fund.