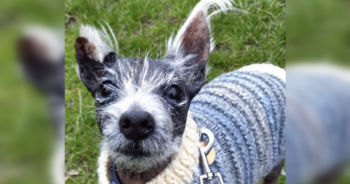 Jay the West Highland Terrier has been looking for a forever home for over 430 days. But sadly, he’s almost completely bald, which has deterred many families from expressing interest. As a result of his hair loss, he also has a lot of specific needs that may be difficult for potential adopters to afford. Yet, he refuses to give up!

While he might not look like your typical Westie, Jay has a sweet and sassy attitude, just like many other dogs of his breed. He knows he’s a special boy, but he can’t help but wonder why no one has wanted to adopt him yet.

Jay is about nine years old, but he’s very lively for his age. He arrived at the RSPCA Macclesfield, SE Cheshire & Buxton branch in early 2021 after his elderly owners became too sick to care for him. They had taken great care of him, but he suffered from severe hair loss because of his allergies, which are common in Westies.

“We worry that this is what’s putting potential adopters off of offering him a new home, but we really hope that there’ll be someone out there who can look past his lack of hair and see that he has a whole lot of love to give,” said SPCA spokesperson Carmen Cole.

However, Jay’s lack of hair isn’t the only setback. Since he’s a senior dog with allergies, he has a lot of unique needs that other dogs at that shelter might not have. Some of Jay’s requirements include:

So, Jay’s care is a little more expensive and time-consuming than most people can commit to. But these extra care requirements are worth it to spend time with this lovable potato. Plus, the coconut oil makes him smell good!

A Forever Home is Out There

Jay has been looking for a forever family for 430 days and counting, but he won’t give up hope. He’s a quirky dog for sure, but he just needs to find a family who understands him. He loves going on car rides, getting butt scratches, and eating vegetables. He’s a sweet boy, but he prefers to only cuddle on his terms.

This charming pup would do best in a home without children or other pets. He wants to keep all the love to himself! His adopters also need to be aware that his vision and mobility may decline in the future due to his age.

“We know it is going to be a struggle to find a home that will tick all of Jay’s boxes, and we understand that the cost of his ongoing care may be putting people off,” Cole said. “But we won’t give up on Jay; he is a spicy character, who is a cheeky chappie with heaps of charm and who has expensive taste — but being this cute doesn’t come cheap! It takes a lot of work to look as good as he does — he deserves the very best.”

If you or someone you know is interested in adopting Jay from this England shelter, you can check out his online profile for more information. His care might be more tedious than other rescue dogs, but experiencing his silly personality will be well worth it!