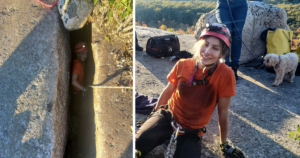 A 12-year-old dog named Liza recently went through one of the most terrifying incidents of her life. She got trapped in a deep rock crevice at a New York state park, but she had no way to escape. It took about five days before rescuers figured out how to free her. Yet, they never gave up trying.

Now, Liza is safe with her family once again. It’s unclear how she got into such an unfortunate situation, but it’s an important reminder to always keep your dog safe when traveling. Liza was very fortunate in the end, but saving her life was no easy task.

Trapped Out of Sight

A woman was hiking with Liza at Minnewaska State Park Preserve when the senior dog suddenly vanished. She fell into a narrow rock crevice about 40 feet below. It was too deep for the woman to see her, but she could hear Liza barking.

The park staff did everything they could to help the pup, but they had no success. They eventually got a camera down there to make sure the dog was still safe. Despite being scared and hungry, Liza seemed okay. The camera showed her trying to lick water off the walls to stay hydrated.

Members from the New Jersey Initial Response Team and the Ulster County Society for the Prevention of Cruelty to Animals arrived later to help with the rescue mission. Since the crevice was so small, most of the rescue team couldn’t fit down there. Jessica Van Ord was the only team member that could fit through the narrowest spots. So, she took on the challenge.

“We were all concerned the dog had not survived until Jessica was able to get closer and hear movement,” said Gina Carbonari, the executive director of the Ulster County SPCA. “The rejoicing on the surface to that news was just incredible and renewed everyone’s motivation to get this little dog to safety.”

No Dog Gets Left Behind

Van Ord shimmied down the narrow opening and lured Liza toward her using hot dogs. She led the pup through the loop of a catch pole and then safely transported her to the surface, where she was reunited with her family.

“It’s always heartwarming to not only have such a positive outcome in cases like this but also to see so many people come together, putting themselves at risk, to save an animal’s life,” said Carbonari.

Vets determined that while Liza was hungry and thirsty, she didn’t suffer from any serious health concerns. It’s a miracle that she made it out safely.

Many people commented on this story, saying that none of this would’ve happened if Liza was on a leash. While that is probably true, her humans can’t change the past. They can only learn from their mistakes. So, instead of blaming them, let’s be grateful that Liza is safe and healthy despite it all. Hopefully, this story will encourage more people to be careful with their dogs at national parks.