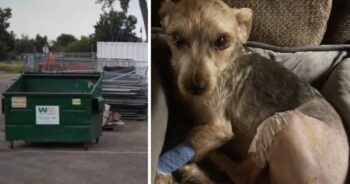 Scott Miller, a construction worker, just happened to pass by a dumpster near his worksite in Westminster, California on the morning of July 27, 2021. Fortuitously, he peeked into the dumpster before garbage collection, thereby saving the life of the Yorkshire Terrier inside.

When Miller found him, the dog was sitting on top of a blanket, alert, but making no sound. Miller believes that if he hadn’t noticed him at 6:30 am, the little dog could have been crushed by the trash truck.

As Miller put it to KDVR:

“That dog, there was no way that there was a misunderstanding that the dog was alive or dead. He was clearly well off. Sweet, sweet dog.”

Once Miller and a co-worker pulled the dog from the dumpster, they noticed he had difficulty walking on his hind legs. Miller phoned police, who took the pup to animal control in Westminster. Animal control determined that he likely had torn ACLs in those back legs.

The Dog’s Owners Claim They Thought He Was Dead

When the animal control officer scanned the injured dog for a microchip, they learned the chip was registered to a couple in Aurora: Robert and Dr. Nickie Bell. The Bells were then issued summonses on three city violations: abandoning animals, neglect of animals, and cruelty to animals.

In a phone call with the animal control officer, Dr. Bell said the dog “was throwing up; hair was falling out, he wasn’t breathing, he wasn’t walking… So we wrapped him in his favorite blanket, and we put him to rest.” The couple was apparently shocked to learn their dog was “very much alive.”

A body camera recorded the moment the couple arrived at Westminster City Hall. The animal control officer asked the two if the Yorkie was still alive when they put him in the dumpster. Robert Bell responded:

In her report, the animal control officer later wrote:

“I asked both parties several questions but I am still not sure what happened or why. In speaking with Robert and Nichole, they both appeared without emotion either to have lost a beloved pet or to find out their pet is alive and doing well.”

No Felony Charges For Incident Called “A Municipal Violation”

Three months later, in October 2021, a Westminster city prosecutor agreed to let the couple plead guilty to neglect of animals alone. They dismissed the other two counts.

The Bells live 32 miles from Westminster, so it does seem odd that they would choose a dumpster that far from home. Ultimately though, the city prosecutor didn’t forward the case to the district attorney because they felt criminal intent could not be proven. In the end, it boiled down to “a municipal violation.”

The Bells eventually paid a $5,000 contribution to the Rocky Mountain Yorkie Rescue Group, as well as $1,085 in restitution to the Foothills Animal Shelter that cared for the dog and $280 in court fees/fines. According to the person the Yorkie was re-homed with, “his vet bills have already racked up more than that.”

Many are upset that this couple didn’t face harsher consequences for their actions. Christopher Smith, the superintendent for the school district Dr. Nickie Bell is employed by, expressed in a statement that he struggles with this situation:

“By all accounts and in my personal experience, Dr. Bell has demonstrated strong judgment and character as an educator and a leader in this district. While her actions in this matter are not related to her job in any way, they are very concerning.”

Following the incident, Dr. Bell went on personal leave. Smith noted the school district “will continue having conversations internally about this situation.”

A New Life For “Teddy”

Naturally, the dog would not ultimately stay with the Bells. He now has a new home and a new name: Teddy. The Rocky Mountain Yorkie Rescue helped make it all possible. His adoptive mom said:

“He’s just the sweetest dog. What could he have done to make someone want to throw him away and ensure his death?”

Fortunately, Teddy got surgery to repair his two torn ACLs. Since it isn’t known how Teddy received those hind leg injuries, his new adopter has this theory:

“I mean, I’m guessing somebody snatched him by his back legs and threw him in the dumpster. That would have done it. How else would he have sustained both knees simultaneously, same age of injury?”

As she also pointed out, animals like Teddy rely on the advocacy of people who care, like Miller, who first found him, and the animal control officer who sought justice.

“These animals can’t argue for themselves. He (Teddy) can’t tell us how awful it was and how much he was hurting. You know if we hurt another human like this, we would go to prison. He just can’t speak for himself.”

Even though the Bells insisted their dog was near death, the 8-year-old seems to be doing just fine now.