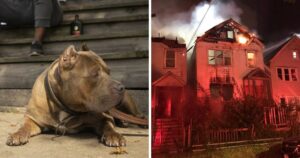 An American Bully named Rello is a two-time hero to his beloved fur dad. When a vicious fire began to rip through their home in the middle of the night, Rello knew he had to jump into action.

Coy Freeman is the proud fur dad of a crew of American Bully pups. Ranging from 8-week-old puppies to 6-year-old Rello, Coy Freeman had a home filled with canine love.

Coy Freeman is now visually impaired, so he often relies on Rello to help him carry out his daily tasks. Most mornings typically began with a light nudge from Rello on his arm, but this morning was very different.

Freeman was awoken on the couch by an aggressive headbutt on his arm. Rello scooped Freeman’s arm under his muzzle and threw his arm into the air, forcing Freeman out of his slumber.

When he finally came to, he couldn’t believe what was happening. The room was filling with smoke, and Rello was urgently pawing at the front door. As charred wood began to fall from the ceiling, Freeman and Rello began their mission to rescue as many of their furry family members as possible.

“I got him, and I got as many puppies as I could grab and we got them out the door.” – Coy Freeman

Freeman scooped as many pups into his arms as possible and ran to the street outside of his home. Once he was outside, the gravity of the situation really set in. His street was filled with neighbors that had already fled from their homes, proving just how many families this fire impacted.

Just as Freeman was about to run back into his home for the rest of his dogs, he was stopped by neighbors and firefighters due to the dangerous conditions. All Coy Freeman could do was watch the firemen enter his home one by one, desperately hoping that they would emerge with dogs in hand.

It took two hours and 45 pieces of equipment for firefighters to tackle the terrifying blaze that ripped through Freeman’s home. Everyone on the scene tried their best to rescue as many of his dogs as possible, but unfortunately, four lives were lost.

First responders put oxygen masks on each pup that was pulled from the home, but some just couldn’t be saved. The fire took the lives of four of Freeman’s beloved furry family members.

“It’s tragic. I will never be the same after this. Health-wise I’m here, but mentally I’m not, though.” – Coy Freeman

This was the second time that Rello woke his fur dad and alerted him to a nearby fire. Just two years ago was a fire in a neighbor’s basement, causing Rello to wake his owner in the same frantic way he did for this tragedy.

Rello is the reason that Freeman is alive today, along with the pups they were able to rescue from the burning home. We are so glad Freeman escaped this situation with his life, and that all of his neighbors survived this deadly blaze as well.

We can’t imagine the pain Freeman is experiencing in the wake of losing so many of his cherished pups. We are sending him our love during this tragic time.

The post Dedicated Pup Alerts His Sleeping Owner Of Blazing Fire In His Home appeared first on iHeartDogs.com.