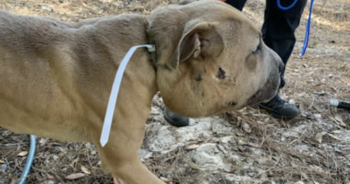 People are enraged after photos of an abused dog took over social media. The Hernando County Sheriff’s Office in Florida posted images of a dog before and after a tight zip tie was removed from his neck. In the first photo, his head is swollen to nearly twice as big as it should be. He likely would’ve suffocated if animal control officers hadn’t retrieved him in time.

The pup is on the road to recovery, but people can’t believe someone would do that to a dog. Deputies are on the lookout for this dog’s owners and abuser.

All dogs want to do is be loved and show affection in return. But this dog felt the opposite of a loving touch when someone strapped a zip tie around his neck. The large zip tie was closed so tightly that the plastic dug into his neck and his head swelled up.

Officers saw the dog wandering around Brooksville, Florida. It took them three days before they were able to capture the dog to remove the zip tie.

“This is probably the worst thing I’ve seen. The dog’s head was twice the size that it normally should have been,” Hernando County Animal Services Officer Keith Berger said.

At first, the dog was nervous and timid but showed no signs of aggression as vets treated his wounds. After he had some time to heal, he warmed up to his rescuers and became friendlier. Animal services employees named him Bugsy.

The zip tie not only caused intense swelling on Bugsy’s head, but it also left a painful indentation on his neck after vets removed it. He’ll need lots of time to allow his wounds to heal, and he also needs to gain 15 pounds.

“They brought him in, and he was very kind and gentle when we were doing our veterinarian care with him, and his prognosis is very good. He seems to be healing right on track,” shelter coordinator Missy Ritter said.

If anyone knows details about Bugsy’s past or the person who hurt him, they’re urged to contact the sheriff’s office at (352) 754-6830. It’s important to remember that the abuser might not be the owner of the dog. There’s still a lot of information to uncover about the situation.

One of the families who helped find Bugsy is planning to adopt him. So, no matter what happens, he will end up in a loving home. This sweet boy definitely deserves it!

The post Deputies Search For Abuser Who Nearly Killed Dog By Zip-Tying His Neck appeared first on iHeartDogs.com.