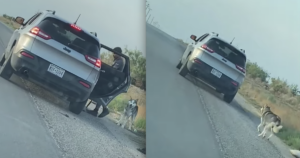 A viral video showed the heartbreaking moment that a Husky realized he was being abandoned. He tried to chase after his family, but the human drove off without him. The poor pup was left alone on the side of the road, wondering what he did wrong. Yet, it didn’t take him long to finally get the love he deserves.

In less than 24 hours, a new family adopted the Husky. He’s likely still a little confused and heartbroken, but now he’s not alone. His family will help make sure that his life is full of happiness and comfort from now on!

Joy Dominguez was there when the Husky was dropped off on a Texas road. She took a video of what she saw and gave it to news agencies. In the video, a young man is seen with the dog on the side of the road. He takes the dog’s leash and collar off.

Then, the Husky gets up and explores the side of the road a bit. As he’s doing that, the person gets in the driver’s seat and drives away without the dog. Thinking he’d been forgotten, the Husky runs after the vehicle, but it doesn’t slow down at all.

El Paso County Sheriff’s Office is currently investigating the situation. The suspects could face up to a year in county jail or a $4,000 fine. Anyone who has information about the dog’s previous family can contact officials at 915-832-4408 or 915-538-2185.

“These crimes against our voiceless animal victims are taken seriously and we actively seek to hold suspects accountable for these cruel acts,” said a sheriff’s representative.

Quick to Start Over

The video gained a lot of attention shortly after it was posted. The Husky visited a vet and was in good health, so an animal rescue group put him up for adoption. In less than 24 hours, he had a new family.

The Clappsaddle family fell in love with the Husky after seeing what he’d been through. So, they adopted him and named him “Ninook” after the dog in the film The Lost Boys from 1987.

“When I saw the video and I saw him run after the car, it just made my heart feel like broken – but now that he’s running around and he’s happy, I feel very happy and excited,” said Maddie Clappsaddle, the family’s daughter.

Ninook is living his best life with his new family. The kids love giving him belly rubs and working on training with him. While officers continue to search for Ninook’s old family, the pup is thankfully onto a happier life.

The post Dog Abandoned In Viral Video Gets Adopted Within A Day appeared first on iHeartDogs.com.