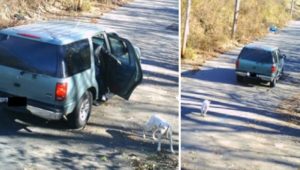 A man was caught on camera pushing a dog out of a car, leaving the dog behind as the car sped away.

The dog was then discovered by a Kansas City Codes Enforcement Officer who was monitoring a camera on an illegal dumping site. What he saw in the footage was just heartbreaking. The poor dog was tossed out of the car allegedly by his owner.

The footage even shows the poor dog running after the speeding car.

The footage was seen 8 days later. Animal Control then sent officers to look for the abandoned dog. Thankfully, he was found in the area. He was hungry and cold, but it appears that this dog was still waiting for his owners to return.

The dog, now named Mojave, was then brought to the KC Pet Project shelter. It was less than 30 minutes that Mojave arrived at the shelter that a couple came in, met Mojave, and fell in love with him instantly. And just like that, Mojave found two people who will give him his forever home.

Awww…we are so happy for you, Mojave! We hope that the happiness and love that couple will shower you will make you forget the people who abandoned you.

And as for the people who abandoned Mojave, according to the post by KC Pet Project, citations are being issued to the former owners who were traced by the investigators through the car’s license plate. The article by BarkPost also mentions that they have been charged with the following: animal abandonment, not having a proper pet license, allowing an animal to run at large, and neglecting to have a Pit Bull breed neutered.

The post Dog Dumped By Owner Is Adopted 30 Minutes After Rescue appeared first on iHeartDogs.com.