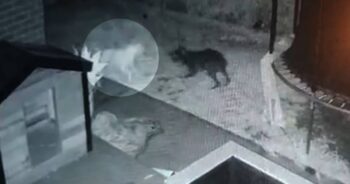 Security camera footage can show us some strange things. And sometimes, those grainy video captures play out into a spooky story. Sure, there’s usually a reasonable explanation for what you see, but what about when you can’t come up with a logical explanation?

That’s where the real creep show begins, and here comes one out of the ghostly realms of Melbourne, Australia. Dog dad Jake DeMarco shared a chilling video captured from the CCTV system in his backyard. It shows his dog Ryder and an unknown playmate who has quite the spectral appearance.

Peek through your fingers at the evidence and decide, is Ryder playing with a pale-colored mystery dog or a ghost pup?

One dark and, perhaps, rainy Australian night, Jake was enjoying the comforts of an evening at home when he happened to glance at his security camera feed. What he saw horrified him. From the left corner of the yard, two shapes came blazing in from off-screen. One of the pups was his dog Ryder, the other an otherworldly specter of a dog.

The dogs then disappeared behind the trampoline, reemerging with Ryder being chased by the ghost dog. The two met up at the edge of the porch for some up-close tussling before Rider had the pale dog on the run again.

Seeing this chilling scene unfold, Jake told Caters Clips, “He was shocked at seeing the second pooch in his backyard.”

When Jake ran outside to investigate, he found the “mystery pup” had already vanished.

Now, maybe the whole thing would be easy to dismiss as another pup dashing into the yard for playtime, but Jake’s backyard is fenced and “fully secured.” The fence had been constructed to a height no dog could jump.

That Jake ran into his backyard with only seconds passing between seeing the footage and jumping into action says the disappearing pup moved fast. Now, the question remains, did the dog escape through mortal means? Or, did he disappear into a realm only those who’ve shed their living skin can touch?

Commenters came alive with the debate of real vs. get real, with some people mentioning floating orbs and others relating how their white dog turns out looking ghostly on their home monitoring system too. A few disbelievers said they’ve never seen a ghost with reflecting retinas. Some of the skeptics discussed the height of the fence, many deciding a dingo could hop a high fence no problem. Whatever you believe, ghost dog or live one, we can all agree, it’s a spooky video that tingles the spine when you first view it!