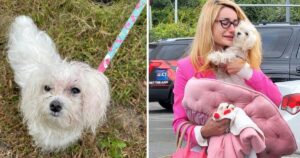 It’s every car owner’s nightmare that their vehicle will be stolen. But imagine how nightmarish it would be if someone stole your car and your dog. One of those is not replaceable.

Sergi and Valeria Karat, a couple from New York, took a drive to Connecticut with their dog Cindy in February. Their car was stolen from a rest area in Fairfield while they stopped to pump gas. Most devastating of all was the fact that Cindy was inside the car at the time.

Later, police recovered the stolen car in Bridgeport. Sadly, Cindy was not inside it.

It’s hard to even imagine how Cindy’s parents felt after their dog was stolen. Fortunately, authorities put all their resources towards locating the missing pup after she didn’t turn up with the vehicle.

After nine long months, detectives finally located Cindy inside of another stolen car in Waterbury, Connecticut. They reportedly recovered her “without incident.”

Once detectives located Cindy, they took her to a nearby animal hospital to get checked out. Cindy lost some weight during her ordeal, but is otherwise healthy and certainly happy to be loved again.

It seems the story of what happened to her will remain with Cindy, but the important thing is that she’s safe now. Cindy remained with Waterbury Animal Control until reuniting with her family a few days later.

The pictures of their reunion will hit you right in the heart. Valeria clearly missed her little girl so much and worried about her safety all this time. You can see the joy and relief on her face.

“They expressed their deep gratitude to CSP Detectives & Waterbury Animal Control, which housed Cindy until today’s reunion. This is a story with a doggone happy ending!”

As for whether the thieves will be punished, the police had this to say:

“Detectives are continuing their investigation and arrests are imminent, proving that the suspects were ‘barking up the wrong tree’ when they took Cindy.”

Of course, no one should be blamed for something like this happening to them. Just remember that car thieves are very sneaky, and they can break into locked vehicles. Thanks go to the dedicated civil servants who recovered a worried family’s precious baby.

The post Dog Stolen With Car Reunited With Her Family 9 Months Later appeared first on iHeartDogs.com.