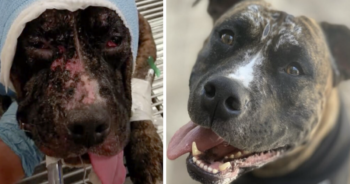 When you first meet Denali, a therapy dog, you might think she’s the happiest, friendliest dog ever. But she has a dark past that she had to overcome to get where she is today. Before her adoption, the poor Pit Bull was on the brink of death.

Back in 2018, someone intentionally set the dog on fire and left her for dead. Her body was covered in wounds, but she survived the horrific incident. Now, three years later, Denali is a bubbly pup who brings comfort to other abuse survivors. She shows them that it’s possible for life to improve, especially when you’re surrounded by people who love you.

Denali used to live with a human who loved her, but a fight between the owner and his wife put the dog in danger. Brandi Corrigan knew Denali was her husband’s favorite dog, so when things weren’t going well, she targeted the pup.

Corrigan let the other dogs out of the house, but she doused Denali in gasoline and trapped her in her crate. Then, she set the house on fire and left Denali to suffer. Suncoast Animal League was able to pull her from the fire before it was too late. However, her burns were so severe that she only had a 50% chance of survival.

But luckily, Denali defied all odds, and now, she’s thriving. In 2019, her foster mom, Karey Burek, adopted her and gave her the love she deserved.

“[There are] still some spots on her back where the deepest burns were,” Burek said. “She’s been through so much – to look at her before pictures and see how badly she was burned and abused, and just to see her come through that and be so happy and forgiving, and wagging her tail, and happy to see people.”

Staying Positive and Helping Others

In 2021, Corrigan was sentenced to eight years in prison for the brutal abuse. So, Denali finally got the justice she deserved. But more importantly, Denali has been doing better than ever, even before that sentence occurred.

Denali is now trained as a therapy dog. She comforts students, senior citizens, people with special needs, and airport travelers. Her latest role is comforting survivors of domestic violence. She can relate to them better than any other humans. Denali helps show them that things can get better.

“The one thing I hear a lot is that she still loves people, even after one person did this to her, and that she hasn’t lost her spirit, or her kindness,” Burek said.

Denali’s story shows the world that no matter how difficult life is, there can be a happy ending just around the corner. Despite everything, Denali continues to greet all humans with a wagging tail. She knows other survivors deserve happiness just as much as she does.