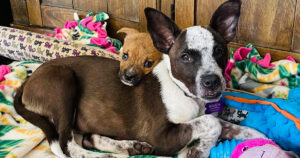 One of young pup Raven’s favorite things to do was sunbathe with her furry family. A dog full of spunk, she loved frolicking with the foster dogs and cats who came to stay with her family. Even though she struggled with her own issues, Raven wanted to help other dogs find their happiness.

Sadly though, this good girl’s life was cut tragically short. At only six months old, Raven’s body had grown tired from the congenital issues that made her life rough from the start. Her mom Jamie devoted herself to Raven’s care, and love was never in shortage. But in the end, her kidneys could no longer keep up with the demand of her growing body, and the sweet puppy passed over the Rainbow Bridge. Before Raven went, Jamie made sure her furry best friend had one last moment in the sun.

The Tale of Raven

Born the smallest in her litter, Raven was a fighter from day one. Mom Jamie assumed she was just the runt and would soon catch up. But Raven’s growth spurt never came. Jamie made sure the little one always got a spot at the milk bar among her litter, but she stayed tiny. At three and a half weeks old, her health took a drastic turn when Jamie found her “cold, limp, and away from her litter.”

Just the night before, she’d been nursing, but now she couldn’t even latch on. Something was drastically wrong, and Jamie shared, “This is when our medical journey started to save Raven.”

Raven was up and down through long weeks of care and visits to the vet, but Jamie wouldn’t give up on her tough pup. As William Shakespeare said, “Though she be but little, she is fierce.” And this was true of Raven.

“I was told over and over that she wouldn’t make it another week, that it was time to let go. There were no answers for her,” Jamie explained. “But still… she hung on. She was born with congenital defects, her kidneys were not developed fully and she struggled with her liver as well.”

Despite all that plagued her, Raven was a happy puppy who loved her family. She found joy in helping with all the foster dogs and cats who found care with Jamie’s Animal Rescue; the foster-based rescue Jamie started when she was only 11 years old. Raven “welcomed every new dog with a kiss.”

“She was a true miracle who was taken from us too soon.”

And though they only had a short six months together, Raven left her pawprints on Jamie’s heart forevermore.

“I may have kept her alive, but she gave me purpose in life,” Jamie shared.

And on her last day, Jamie wanted to be sure her best friend had everything she wanted, making sure Raven had time in the sun with her doggie friends. Watch as the whole gang at Raven & Friends enjoys one last time with sweet Raven.

Jamie’s Animal Rescue takes on some of the toughest cases – ones that other rescues might consider hopeless. Consider donating at JamiesRescue.org to help support and care for other pets like Raven and Roland.

The post Dying Puppy Shares One Last Day In The Sun With Her Beloved Family appeared first on iHeartDogs.com.