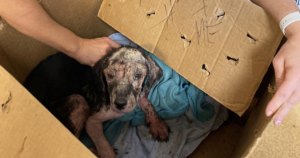 A tiny dog shivered in fear when staff at the Kentucky Humane Society found him. He had been shoved into a box, which was taped shut with small holes poked in the top. Then, he was left outside the shelter on the verge of death. As soon as someone found him, shelter staff and volunteers rushed to get him medical care. They weren’t sure if he’d even survive the weekend, but he’s still fighting for his life.

Followers pointed out that his story is similar to Ethan’s, who is another malnourished dog that the humane society saved. Hopefully, this little pup will become just as strong and healthy as Ethan too!

A Final Plea for Help

A staff member found the puppy when they took items out to the recycling bin. Outside the shelter’s doors, there was a cardboard box that had the words “FOUND HELP ME” written on it. The box was sealed shut with small air holes on top. When the staff member opened the box, they found an emaciated puppy with severe hair loss.

The poor pup had inflamed skin, which was swollen from untreated infections. Most of his hair was missing, and instead, he was covered in bloody sores. He had demodectic mange and was also malnourished. So, he was too weak to stand on his own.

“We were not sure if he would make it past the weekend,” the Kentucky Humane Society wrote on Facebook.

Security footage shows a man leaving the puppy at the humane society and then running away. It’s unclear if this individual was the abuser or just a kind stranger who was scared to be blamed for the puppy’s condition. Either way, that person hasn’t been identified.

Every Day is a Miracle

The puppy is only 15 pounds, but he already has his adult teeth. Shelter staff guess he’s six to eight months old and that he should weigh closer to 25 pounds. They think his growth is stunted due to not enough nutrition. His immune system is also very weak, but they refuse to give up on him. Every day he survives is a miracle.

“This puppy – whom we have not named yet – has a long road ahead of him,” said the Kentucky Humane Society.

The shelter is open to naming suggestions from followers. They believe that after everything the puppy has been through, he deserves the most beautiful name possible. His improvements so far have been minor, but animal lovers will continue to do everything they can to give him the best life possible.

Like other shelters and rescues, the Kentucky Humane Society relies on donations to fund medical expenses and additional costs for care. If you’d like to help this puppy and other dogs like him, please consider donating.

The post Emaciated Puppy Found Outside Shelter In Box That Says “Help Me” appeared first on iHeartDogs.com.