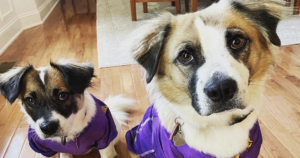 When Jane Salazar and her husband adopted their dog, Diego, they didn’t care what breed he was. If someone asked, they’d label him as “fluffy” and “manly.” But over time, curiosity got the best of them, so they decided to get an Embark dog DNA test.

The DNA test showed that Diego is a Pit Bull and Australian Cattle Dog mix. Yet, it also revealed some shocking information about the dog’s health concerns. They learned that Diego would likely go blind in the future, so they decided to adopt a puppy to support Diego during his vision loss. Diego formed an even closer bond with the puppy than the couple imagined!

Diego’s DNA test showed that he had two copies of premature retinal atrophy, which meant he would go blind. Salazar took him to a dog ophthalmologist to confirm the test’s results. Sure enough, Diego’s vision had already started worsening at one year old. The ophthalmologist mentioned that having another dog around could help him adjust to his vision loss over time.

So, Salazar looked at rescue websites to find a friend for Diego. One rescue had a puppy who looked just like a smaller version of him. Her name is Dixie, and the family adopted her soon after.

“Immediately, they played well together. She holds her own, and they play beautifully together,” Salazar said.

The couple quickly got a DNA test for Dixie to check for underlying health concerns. While Dixie didn’t have the same vision problems as Diego, her results were even more shocking. The test’s relative finder showed that Dixie and Diego are siblings. They weren’t in the same litter, but they have the same parents.

The two siblings get along so well, but Salazar says their personalities are very different. She describes Diego as aloof and timid, while Dixie is energetic and curious. Yet, she loves them both immensely.

After this unique experience, Salazar recommends that all dog parents get a DNA test done. Even if you’re not curious about your dog’s specific breed, there’s lots of other important information you could discover.

“It allows us to prepare health-wise,” Salazar said. “For Diego, who knows how long it would’ve taken us to find out about his vision loss. Without the test, we might’ve just thought he was a weird dog that likes to sit and stare.”

Not only are Diego and Dixie related through DNA, but now they’ll be siblings for the rest of their lives. Diego’s vision will likely continue to decrease over time, so Dixie will be there to help him get around and enjoy the world, sort of like his own seeing-eye dog!