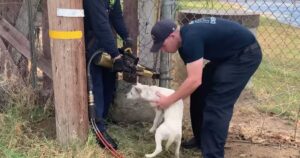 For many public servants, dogs are also considered members of the community. That’s why they don’t hesitate to use their time and skills to help a dog in need when a situation arises.

Fire fighters from Kern County, California indicated themselves as those kinds of people when they rescued a dog stuck in a wire fence. The little pup had somehow gotten his head into one of the diamonds in the chain-link fence.

The Kern County Fire Department shared the story on Facebook:

“A very curious puppy got some much-needed help when his head got wedged in a fence this morning. The firefighters used the “Jaws of Life” to rescue this little guy near an elementary school in Lamont.”

And since this is naturally everyone’s first question, the fire department was quick to add:

“He was unharmed and very happy to be freed!”

You can tell a human the importance of staying still while the jaws of life are working inches away, but a dog might not get the message. To prevent any injury, one of the men held the dog gently while the other cut through the fence.

Once the opening was wide enough, the first was able to lift the puppy away. The sight of his little tail tucked under his body indicates just how terrified he was. Thank goodness these kind public servants treated the rescue like they would a human’s.

The department also shared a video of the rescue, which you can watch below:

As the fire department’s hashtag of choice says: #JustAnotherDayAtTheOffice!

While I can’t wholly verify the authenticity of the comment, one member of the community wrote underneath the rescue video that this dog was later welcomed into the home of one of the men who rescued him.

“[M]y friend and RHM Christopher Carbonell facilitated this rescue and took the pup into his home after rescue… Love u man…u good people.” – Michael Powell via Facebook

In times when we all just want to see a little love in the world, residents of Kern County are thankful for their thoughtful public servants.

“We love you guys. From the small stuff to the big stuff. Thank you for your service!” – Wendy Given Bereda via Facebook

If you see an animal in distress in your hometown, don’t hesitate to call the non-emergency number and ask for some assistance from the fire department.

The post Fire Department Uses Jaws Of Life To Free Puppy With Head Stuck In Fence appeared first on iHeartDogs.com.