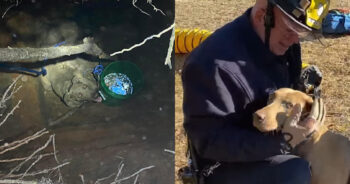 Florida is a dog’s paradise. There, dogs will find white sandy beaches to frolic and wooded trails to sniff. A pup could never be bored will all this room to play in the warm sunshine. But one South Walton County Weimaraner enjoying all this space to run found herself tripped up by a hole. And not just a small hole, but one that dropped 15 feet below the surface, trapping the poor pup deep underground.

With the South Walton Fire District on watch, though, this sweet girl wouldn’t stay trapped long. These Florida fire rescue heroes arrived quickly and had her back in the arms of her worried family in no time!

A Big Fall Into a Deep Hole

When a call came in around three in the afternoon about a dog that had fallen into a fifteen-foot-deep hole in the small city of Paxton, South Walton Fire District’s Technical Rescue Team (TRT) hurried to the scene. Walton County Fire Rescue’s Squad 3 and District Chief 2 met them on the scene to assess air quality in the small space. After the air was deemed safe, a ladder was lowered into the hole where the trapped dog waited for help.

The SWFD shared, “The firefighter descended the ladder and made contact with the dog, who was very friendly.”

Crafting a safety harness from some webbed strapping, the firefighter hoisted the dog into his arms and climbed up the ladder. That’s an impressive feat as Weimaraners aren’t small pups! As the dog and her hero appeared at the top of the hole, the SWFD crew was there waiting and helped the pair onto solid ground.

The Walton County Animal Services was on the scene as well and evaluated the dog for any injuries.

“Thankfully, the dog was in good condition and did not appear injured.”

The dog’s family was there to claim her and so happy to have their girl back in their arms.

Quick Work to Fill the Hole

Also on scene, the Walton County Public Works department said the hole appeared to be a concrete drainage system or vault of some sort. But to ensure this dangerous hazard couldn’t trip up another victim, the works department trucked in a load of dirt and filled the hole before the sun could set on the day.

“We are very grateful to have been a part of this happy ending and appreciate the professional and quick work of all responding agencies,” said the South Walton Fire District.

While the dog in question wasn’t available for comment, we can safely assume she was quite thankful for the quick response and is happy to be home!