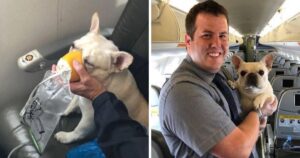 Two fur parents are thankful for the fast action of the flight attendants on their Jet Blue flight. When their beloved French Bulldog fell into respiratory distress, the plane crew jumped into action and offered her life-saving care.

Michele and Steven Burt were on a Jet Blue flight to Worcester, Massachusetts with their 3-year-old Frenchie named Darcy. Darcy is a healthy pup with no underlying issues they were aware of, so the couple assumed she would be safe with them in the cabin.

Michel and Steven had Darcy placed in her carrier underneath the seat as they took off, assuming Darcy would rest comfortably throughout their journey. About 30 minutes into their flight, they noticed that Darcy was not acting like herself and that their beloved pup appeared to be in distress.

Darcy began pushing her face against the mesh on her carrier, appearing as if she was trying to escape. Assuming that Darcy was just restless with having to sit still, Steven asked her to lay down. Darcy is normally a very obedient pup, so the couple knew something was wrong when Darcy continued to push her face against the front of the carrier.

Michele thought Darcy could just be too warm, so she unzipped the carrier and allowed Darcy to poke her head out. It was at this moment that Michele noticed the blue color of her tongue and lips.  Michele had learned previously that Frenchies are prone to breathing difficulties, so she knew she needed to take this seriously.

Michele immediately pulled Darcy onto her lap to help her calm down and regulate her breathing. Darcy was still in distress even with being on her fur mom’s lap, and the color of her tongue would not improve.

One of the flight attendants then approached Michele to remind her of their policy with keeping dogs in their carrier. Michele quickly explained Darcy’s situation and how badly she needed help, leading to the impressive rescue mission to follow.

“We all are affected by cabin pressure and oxygen fluctuations, human, canine and feline, etc., but the fact that the Attendants were responsive and attentive to the situation may have saved Darcy’s life. Though some may reduce the the value of a pet’s life and applying lifesaving efforts to a dog, the attendants applied their skills in a humane and caring way that I like to think represents the best in all of us as human beings.”  – Michele Burt

Flight attendants Renaud and Diane knew it was time to go against policy and do everything they could to save little Darcy’s life. They first brought multiple bags of ice to place around Darcy’s body, but even this could not pull her out of respiratory distress. With no other options on the table, Renaud had a brilliant idea.

Renaud then brought out a portable oxygen tank with a small mask that could wrap around Darcy’s face. They handed the mask to Michele as she held Darcy in her lap, allowing her to hold the mask in place as Darcy took in each breath. This was clearly the action that saved the desperate Frenchie, as she was bright and alert again within a few minutes of receiving oxygen.

It only took a short time for Darcy to stabilize and be brought out of her respiratory episode. Within minutes she was so alert that she was pushing the mask off her face, a far cry from the lethargic pup she was just a few moments earlier.

“Renaud Spencer and Diane Asher were the helpers today. It may have been only a “dog” to some, not a major disaster certainly, but a family member to us. Goodness and kindness along with the ability to assess a medical crisis, albeit a canine in crisis saved the day.” – Michele Burt

Michele states that Darcy has made a full recovery from her terrifying event. Michele plans to speak with her vet about why this could have happened and how she can better care for Darcy if they ever need to travel together in the future.

We are so thankful for the fast action of the Jet Blue plane crew! They are true heroes!