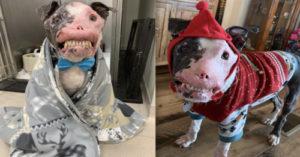 Phoenix doesn’t look like your average dog, but that doesn’t matter to him. He’s no different than any other pup, but sadly, many people don’t see it that way. His appearance often scares people and causes them to look away. But he’s just a sweet dog that wants someone to love and understand him. The way he looks doesn’t hold him back. So, he’s ready to show the world what an incredible dog he truly is.

This poor dog was left as a stray for at least a year. Sadly, people often saw him scavenging for food, but once they got a good look at his face, they just kept walking. No one would give him a chance simply because he didn’t look like what they were used to. He had been referred to as “freakish” and “horrifying” far too many times. But now, there are many people that think he’s beautiful, and they’re absolutely right!

Skiatook Paws & Claws Animal Rescue in Oklahoma fell in love with Phoenix right away. Someone that spotted him finally called the rescue for help. When the staff heard about Phoenix’s unique appearance, they didn’t think twice. They were determined to save him.

When the rescue found Phoenix, they could tell that he had belonged to someone in the past. Unfortunately, that likely means that his previous family failed to care for him, which is how he ended up like this.

“He was skin and bones. You could see all his ribs,” said Carisa Ducharne with Skiatook Paws & Claws. “[He was] just so inflamed that he couldn’t close his eyes. He had so much swelling and inflammation in his face.”

The rescue has no idea why Phoenix looks the way he does. When they found him, he wasn’t scared of humans at all. If fact, he was such a happy dog. His tail wouldn’t stop wagging and he always wanted to play and be loved. It was clear that whatever happened to him did not affect his loving nature.

Skiatook Paws & Claws regularly posts updates on Phoenix’s incredible journey. He has gained lots of love, and many people have donated to help with his medical costs.

Family Animal Medicine has worked hard to help Phoenix as much as possible. They have figured out that he most likely has an autoimmune disease, but they aren’t sure exactly which one yet. He’s now doing so much better than when he arrived.

“He’s done nothing but improve every single day,” said Ducharne. “I wouldn’t say this is intentional trauma, but neglect is also abuse, and he was without a doubt neglected.”

Lots of dog lovers have reached out to the rescue to get more information on Phoenix. There have even been multiple individuals that have expressed interest in adopting him.

The rescue is thrilled that so many people want to welcome Phoenix into their homes. However, they made a post explaining that if Phoenix is ever put up for adoption, it likely won’t be for a long time. They want to make sure that he’s completely healthy before he goes off to a forever home.

Phoenix is grateful to see that there are so many people willing to support him. The staff are doing everything they can to make his life as comfortable and exciting as possible. Sure enough, he seems happy as can be! After a hard life, Phoenix is finally able to prove that true beauty comes from within.

If you are interested in donating to help Phoenix and other dogs in need, please reach out to Skiatook Paws & Claws Animal Rescue to make a difference today!

The post “Freakish” Dog Proves Beauty Comes From Within appeared first on iHeartDogs.com.