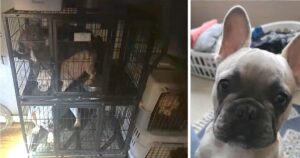 The parent of a French Bulldog in Orange County, Florida experienced his worst nightmare in March of 2021. His precious pup Bugsy was aggressively taken from him by gun-wielding thieves.

In reporting the hostile abduction of Bugsy, this family had no idea they were about to lead police to a horrific puppy trafficking operation. Not only did the thieves steal dogs like Bugsy at gunpoint, but they also robbed pet stores. The poor dogs were kept in inhumane conditions.

“When detectives started investigating the robbery of a #frenchbulldog named Bugsy – ripped away from his owner at gunpoint off Hiawassee Road in March – they had no idea it would lead them into a dark, disturbing world of dog trafficking and puppy ‘Chop Shops.’”

The Search For One Dog Uncovers Many

In a press conference, Orange County Sheriff John Mina explained the search for Bugsy led detectives to find out much more:

“They found these criminals that would steal puppies and dogs from pets stores and in this case from their families and either unload the puppies for cash or they would keep the puppies or dogs for breeding.”

At the press conference, Detective Mike Peers described how a search for Bugsy resulted in this shocking discovery.

“As you can imagine, Johnny [Matos] and his family were extremely distraught after Johnny was robbed at gunpoint of their dog Bugsy, so our primary concern was to bring Bugsy home as soon as possible,” he said.

Detectives later received multiple tips that a man named Ronny Baker was in possession of Bugsy. Within a few months, Baker was arrested for unrelated charges.

At the time, he had an English Bulldog puppy with wounds on her back. Peers said the puppy was “sloppily and improperly sewn back up,” and the wound became infected.

These days, many dog owners have their pets microchipped so the dogs can be rightfully returned to their true families if lost. The criminal operation had a sick plan to circumvent that.

According to deputies, this puppy trafficking ring had an underground puppy “chop shop” where the suspects would literally cut the microchips out from under the dogs’ flesh and remove and replace them. Baker and his relative Quantavious Williams took these dogs to “Dogman” Bobby Rivera, who would perform medical procedures on them without any sort of veterinary license.

The Orange County Sheriff’s Office filed charges with the State Attorney’s Office on Baker and Williams for robbery with a firearm, grand theft, and possession of a firearm by a convicted felon. Both suspects are currently in jail outside of Orange County for unrelated crimes.

The Sheriff’s Office indicated that they would do everything they could to get people committing these heinous crimes off the streets.

Authorities located nine dogs on Rivera’s property with no access to food or water. Unfortunately for Bugsy’s family, he was not among them.

After what must have felt like eons but was actually a few months, detectives found Bugsy through a contact of Baker’s and brought him home. When asked by reporters how he felt to finally have Bugsy back, Matos replied:

“Don’t make me cry on camera, it’s amazing. It’s great to have him home.”

“It sounds funny but it might be the most rewarding case I’ve ever worked… To be able to do this and have a positive outcome, it’s extremely rewarding.”

French Bulldogs rank among the most stolen dog breeds. Parents of these dogs should be wary of this, and prospective buyers should always look for signs of a puppy buying scam.