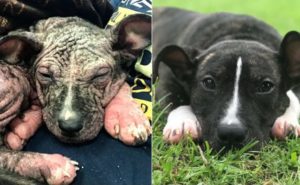 Adoption First Animal Rescue specializes in saving death row dogs from euthanasia. They pulled the pitiful pup out of the shelter and placed her with one of their seasoned foster moms, Heather Corradino-Llantada.

The moment she took the dog in her arms, Heather knew something more serious than skin mites was wrong. The poor pup was burning up with fever. Heather rushed her to the vet where her temperature registered at over 105 degrees.

Workers at OCAS had guessed her age at 12 weeks due to her size, but the vet determined she was actually six-months-old. Life as a sickly stray had stunted her growth. She was soon diagnosed with anemia and a potentially deadly case of Canine Distemper.

Heather named the puppy Amaani – which means hope, aspiration, and desire – to help give her strength in the tough days ahead.

“There were several instances that medically, she should have passed away, but she displayed a fighting spirit and will for something better,” Heather told iHeartDogs. “Amaani spoke with her eyes that she was going to fight–I was more than willing to match that will, regardless of the personal sacrifice.”

As difficult and heart-wrenching as it was to watch Amaani struggle, Heather was more than prepared to help her fight. During her military career, she received medical and surgical training that has proved invaluable to her work as a foster pawrent. She chooses to take in the most difficult cases; the most desperate underdogs in need of physical and emotional healing from their various ailments.

“These are the ones that are first to hit the Euthaniasia List in any shelter, therefore making them the ones that I prefer to take,” she says. “‘Cute and fluffies’ stand a much greater chance for adoption or rescue. I don’t want the easy stuff. I want the challenges that most won’t take!”

Heather’s home is filled with former “challenges”, including four Pit Bulls that once suffered from Demodex like Amaani. In all, she has 11 permanent rescue pets – nine dogs and two cats – in addition to a near-constant stream of special-needs fosters.
Amaani proved to be a particularly difficult case, but with round-the-clock care, she began to show signs of improvement. Her brindle and white coat began to fill in and she tripled her weight, although she will always be a “micro-Pittie.”

She was extremely fearful, depressed, and shut down when she first arrived, but after weeks of gentle care and reassurance, she learned how to trust. Now, her favorite spot is snuggled up on the sofa or “spooning” in bed!

“She loves to be catered to and can be quite the diva,” Heather says. “On the other hand and despite her ‘fun-size’ she can definitely hold her own–make no mistake! There’s never a dull moment
when she’s around!”

Just six weeks since her rescue, Amaani is completely unrecognizable from the pitiful pup she once was. Without the devoted foster care Heather provided, she would not have survived, let alone thrived.
Update: Amaani was adopted and is now happy in her forver home!

The post “Fun Size” Rescue Dog Beats The Odds Thanks To Her Devoted Foster Mom appeared first on iHeartDogs.com.