German Shepherd biting is a very common topic for discussion and not always one that owners like to hear about. The German Shepherd has the second strongest bite amongst dogs. This should not be seen as a bad thing by you as the owner. Being the loyal protective breed they are it can definitely work to you and your family’s advantage. 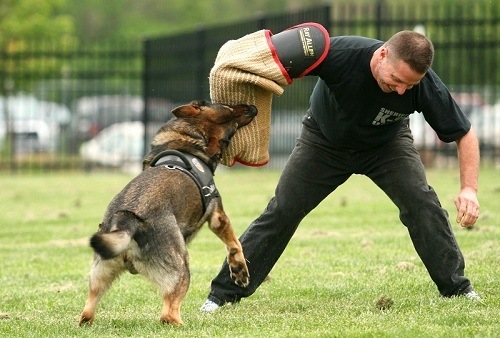 It is interesting to note that small dog breeds are likely responsible for more bites than the German Shepherd’s biting, it is just that the small dog breed bites often go unreported.

Just like babies a German Shepherd puppies puts everything into their mouth, and they often bite it. This is their way of learning and finding out about things, so everything from food to toys to litter mates to your finger goes in their mouth.

In dog packs the dominant leaders use biting to discipline the lower ranking dogs. This is probably how play fighting began.

Play fighting definitely has its benefits as it helps German Shepherd’s develop social and physical skills and teaches them how to interact positively within their own family pack.  German Shepherd puppies also learn to control their biting from the reactions they receive from their mothers and litter mates during these play and play-fighting sessions. This is called bite inhibition.

A German Shepherd Mother will discipline her puppies in her litter to teach them the “biting rules”. If her puppy bites her at first she will ignore it, then if the puppy does it again she will growl at the pup, show her teeth and might even bite the puppy and pin it to the ground.

If the puppy hasn’t learned his lesson and keeps it up, then mom might grab him by the scruff of his neck and give him a shake until he acknowledges her authority by relaxing his body, laying his ears back and keeping still for a moment. In dog language this is the equivalent of a “time out” for a particularly aggravating little puppy.

For us to apply these same principles to our German Shepherd biting puppy. The next time he bites you could yell out “ouch” in a loud voice and refuse to play with him for a few minutes. German Shepherd puppies love the attention of their owners so this should have the desired effect, they love to please their owners and will try very hard to do this.  If he does it again then give him a little scruff shake and scold him in a low-toned, threatening voice. If your puppy still keeps on biting flip him over on his back, scold him in that low, growling voice and gently (but firmly) hold him in that position until he relaxes and accepts your authority.

It is very important to reward your German Shepherd puppy when he does not bite you during playtime.

How to Avoid German Shepherd Biting in your puppy

Some games that you play with your German Shepherd puppy may encourage him to bite. So be aware of these games and try and avoid them:

Although some of these games may seem fun at the time with your puppy they can lay the foundations for some serious problems as your dog grows and develops German Shepherd biting problems.

If biting in your German Shepherd is allowed to go on then it will become much more of a problem in the future. You need to make your puppy understand that you are the leader of the pack.

There needs to be a leader of the pack in your German Shepherd’s mind and if you are not the leader then he will take on the role, and this is definitely not what you want.

All German Shepherd puppy biting problems must be corrected right now, so that you and your dog will be much happier in the future.