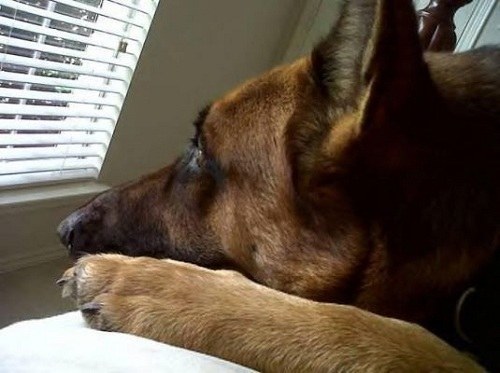 Separation anxiety is one of the most common behavioral disorders for a German Shepherd and if it is not dealt with at an early age, the result can be crippling for your dog and your ability to leave the home.

Separation anxiety is when your German Shepherd quite literally panics when isolated from you or you leave the home without him. This can rear its ugly head in a number of ways.

The most common way is for your anxious German Shepherd to bark; sometimes only lasting for a few minutes, and at other times for hours on end. If you’re at work and your German Shepherd is barking for hours, then as you can imagine this causes big problems especially if your neighbors are home or even worse work shift work and have to sleep or at least try to sleep during the day.

The problem is that dogs are social animals they like company. German Shepherd separation anxiety is common because in the wild they live in packs and they form close bonds.

In modern times, that loyalty and closeness is admirable, but it also creates situations of extreme anxiety. Most severe German Shepherd separation anxiety, at least the more severe forms of it, is brought on by traumatic experiences. If you got your dog from a shelter or rescued it from a mill, they are likely to be more prone than others to anxiety.

While barking is the most common symptom, separation anxiety can grow and become a lot worse. If the anxiety is extreme your German Shepherd can destroy the house, whine, shake, urinate, bark for hours, poop and even cause self harm with the anxiety.

Usually, this will be triggered by a sound or action that your German Shepherd comes to know as a sign of you leaving. It might be getting your coat or uniform on, lacing up your shoes, grabbing your keys or even your alarm clock in the morning if their anxiety is severe enough.

Having a dog with severe separation anxiety can be hard. One part of you feels bad for the dog, but another part grows frustrated that you cannot leave the house without the dog growing upset. So, it’s best to tackle it head on, making key changes to both you and your German Shepherd’s routine.

To start with, make sure your dog gets a LOT of exercise. Before you leave, be sure they are too exhausted to really care that you’re gone. Most dogs will not grow anxious if they can disassociate your act of leaving with that initial moment of panic.

Additionally, try to give your dog something to do – a toy, a puzzle, some chews. Severe anxiety will usually cause them to ignore such bribes, but if your dog is just a little upset, this will keep them busy long enough to get over you leaving.

You should also get them used to you leaving. Throughout the day, go through your leaving routine and then don’t leave. Or, one day, just get up and leave without any warning – without socks or keys or anything.
By mixing up your routine, and by not paying attention to your German Shepherd before you leave the house, you should be able to disassociate the act from their mind with that sense of panic.
Finally, make sure you ignore the dog if he starts to whimper or whine. This is a tough one, but the more attention you lavish on them when they get upset, the worse it becomes. You need to ignore it, and do your best to create distance between your act of leaving and your dog.