Mari Grigaliunas was worried. She and her fiancé, Jeff Stachura, were about to meet an 8-month-old Australian Shepherd mix they had spotted on Petfinder, listed by All Herding Dog Breed Rescue in Joliet, Illinois. She’d been looking for the perfect match for some time and, when she saw this pup’s “wild coloring, puppy dog eyes and floppy right ear,” she knew he was the one. 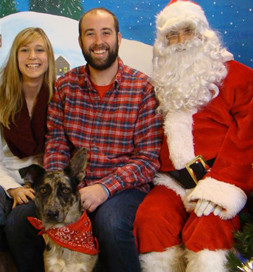 A visit to Santa Claus marks the season.

But on the way to the rescue, she fretted: What if he didn’t like them? What if it wasn’t a good match?

Jeff said he would like them-and he was right. The puppy “walked up to us and lay down at our feet, waiting for a belly rub,” Mari says. Everything was OK. They adopted him and named him Charlie “after Charlie Kelly, a loose-cannon character on the sitcom “It’s Always Sunny in Philadelphia” because he too is a bit of a wild card.”

The couple understands that love is a two-way proposition, so though they were surprised when Charlie cowered under their chairs for an hour at his first dog training class, they were patient. “Charlie loves us when we have a bad day and when we have a great day just the same, and we owe him the same kind of love,” Mari says.

Having Charlie around is like the best tonic in the world. “When I wake up in the morning, tired and grumpy, Charlie runs to me bouncing around because he is simply so excited for another day,” Mari says. “When I come home, he greets me with the enthusiasm humans save for loved ones who return from war, even though I might have only been gone an hour.”

She’s also noticed that he has an amazing internal clock. “Some days I am home before Jeff, … and within 10 minutes of Jeff’s usual arrival time, Charlie begins staring out the window, looking for his car, then dashes to the front door to check if someone is there yet.”

Charlie has changed their lives in the four months they’ve had him. “He reminds us every day to stop and smell the roses,” Mari says. “In the midst of our chaotic, busy life, he ensures we take time for a walk every day-in the sun, in the rain, in the snow, and he always enjoys it. Life is simply more fun with Charlie.”

Learn why Petfinder believes all dogs should wear collars and tags.