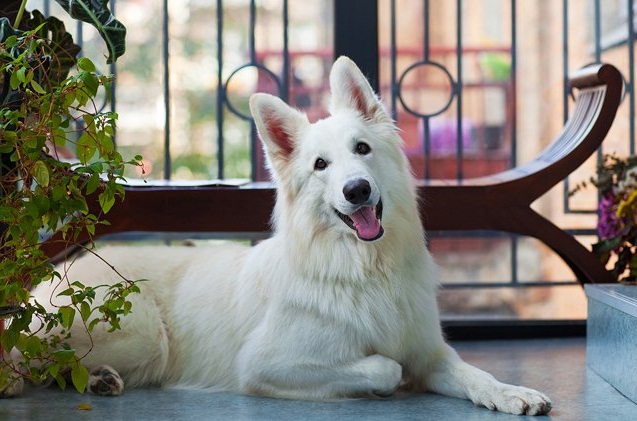 Just like any other this dog breed also have a string of health issues. Health problems can either be caused by genetics, or can be viral in nature.

As an owner, it is your responsibility to check for signs that your dog is suffering from any ailment.

Diseases can come in many forms, so keeping a close eye on your four legged friend can help a lot in stopping any health problems your dog might have before it get out of hand.

It’s not as if you’re dog will just come up to you and say, “uh boss, my tummy hurts”.

What Did You Put On My Dinner Plate Last Night?

Diet plays a key role in the health of your dog. As dogs are most likely to eat anything, you should try and keep any edible, or better yet, any “eatable” thing that can fit inside his or her mouth.

Although majority of human food are safe to feed to your dog, some can be harmful to them and could lead to serious dog medical problems.

Food you should not feed your White Shepherd

Some types of mushrooms can cause health problems. This is due to the fact that some mushrooms have toxins in them which are harmful to a dog’s organs.

A dog eating the wrong type of mushroom can go into shock, and in some instances even led to death. As mushrooms can freely grow around our homes, checking the yard for these fungi is a good idea.

Whether in its raw, cooked, or powder form, you should not feed your puppy Garlic and Onion. Both vegetables contain disulfides and sulfoxides which could cause your dog to become anemic.

As anemia is the shortage of red blood cells, this can lead to other health problems. You should also avoid feeding your dog baby food for fun. Most baby food have onion in them.

Studies have shown that grapes contain a toxin which can damage your dog’s kidneys. Though a delight for us humans, this is toxic to dogs. As for raisins, they are nothing more than dried grapes.

I do admit I was guilty of feeding this treat to my dog before. The reason why chocolate is toxic for dogs is due to the presence of theophylline and theobromine.

These substances can affect the dog’s nervous system, and can also cause heart problems. In addition, chocolate have caffeine which is also harmful to your White Shepherd puppy.

There is a reason as to why some pet foods are priced higher than some. Just like milk for human babies, the higher the price, the better the quality.

When it comes to food, low grade stuff may save you some money, but it may be slowly killing your canine. As most pet foods are processed, it is not far from reality that there may be some that uses chemicals that can harm your pet.

So to avoid health problems caused by the wrong dog food, do go for the top brands to be safe. Every living thing needs to eat.

And since we know better compared to our four legged friends, it is up to us to make sure that health problems are kept in check. Think of it as taking care of a fiend that will always stay loyal to you until death.