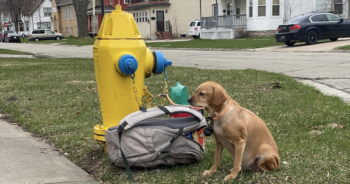 Kylie Engelhardt was devastated when she found a dog abandoned in Green Bay, Wisconsin. The small canine was tied to a fire hydrant with a backpack and a note. So, Engelhardt knew the dog’s family probably wasn’t coming back, but she tried to stay hopeful.

After staying with the dog for a while, Engelhardt was certain the dog had been abandoned. The local humane society is willing to accommodate any surrendered dogs, so it’s sad to see someone give up their pet in an irresponsible way. But thanks to Engelhardt’s kindness, the dog is now on a path to a new life.

Engelhardt was walking down the street when she spotted the dog all alone. The pup had been dumped with a backpack full of dog food, treats, and toys. There was also a note stating that her owners were unable to keep her. The note mentioned that the dog’s name is “Baby Girl.” Engelhardt took photos of the heartbroken dog and shared them on Facebook.

“Left on the corner of E Walnut and Clay. Calling into the police but does anyone recognize?!” Engelhardt wrote. “Cannot believe someone could do this!!!!”

RELATED: Dog Abandoned After 10 Years For “Not Learning To Be Good”

After posting the photos, she sat with the dog for an hour, waiting for someone to return. She kept the dog warm and comforted her as she contacted authorities. When the owners didn’t return, she took Baby Girl to the Green Bay campus of the Wisconsin Humane Society. The shelter welcomed the pup without hesitation.

Baby Girl is still in the care of the humane society, but she is on stray hold to see if her humans come to claim her. The humane society is also investigating leads to see if they can figure out who abandoned her. The staff members are heartbroken that someone would discard a dog this way, especially since the shelter can waive surrender fees and allow anonymous surrenders.

“We regularly work to make sure that surrender fees are not a barrier to those needing to rehome their pet, and although we request a surrender appointment be made in advance, we do take in emergency surrenders if necessary. It’s important to us that the community knows we are a supportive, welcoming resource for those in need,” the Wisconsin Humane Society stated.

Baby Girl is 23 pounds and about six years old. Once the stray hold period is up, she’ll be put up for adoption so she can get a second chance at life. Many people have already expressed interest in her on Facebook, so she’ll likely have a loving home in no time! You can visit the humane society’s website to find out more about her and other adoptable animals.