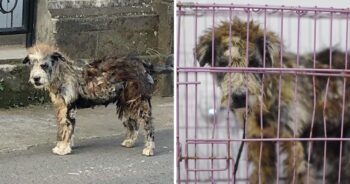 Lexie started her life as a “desirable” designer dog. But over time, her owner paid attention to her less and less. She ended up mainly being a street dog who would report back to her human occasionally. Yet, most of her days were spent on the same roadside in Bali. Over time, she became extremely matted, covered in wounds, and infested with ticks and fleas.

Despite her rough appearance, animal rescuers could see her beauty beneath the mats, dirt, and debris. The pup was hesitant to leave her old life behind, but little did she know, her new life would be a thousand times better!

When volunteers from Mission Pawsible first spotted Lexie, they could tell that she’d been there for a while. She barked and backed away whenever they neared her. They tried luring her to crates and slip leads, but the pup knew not to trust strangers. So, they made a couple of trips to try to gain her trust.

One day, a man approached the rescuers as they were trying to capture Lexie. He claimed to be her owner, and he told them they could have the dog. He picked up Lexie and put a leash on her so the rescue could safely transport her. The man showed no emotion as he parted ways with the dog, but Lexie seemed heartbroken when he left her.

“The sadness and confusion in Lexie’s eyes was heartbreaking. Removing owned animals from their humans is truly a horrible experience. She may have dreadlocks and been neglected but she still loves that man,” Mission Pawsible wrote on Facebook.

RELATED: Before And After: 17 Beautiful Rescue Dogs’ Transformations

Right away, the rescuers bathed Lexie so they could assess her health. Luckily, she didn’t have as many injuries as they expected. She still looked rough, but it would only take a few weeks for her to start looking more confident and beautiful.

A woman named Michellina fell in love with Lexie and her heartbreaking story. She was looking for a friend for her other rescue dog, and she had a good feeling about Lexie. At first, Lexie was hesitant around her new canine sibling, but it only took a few days for them to become best friends.

Over time, Lexie gained confidence, and her beautiful hair grew out. Now, she’s so fluffy and optimistic that you’d never realize she’s the same dog. When she gets excited, she makes an adorable sound that’s between a howl and a growl.

“It’s very rewarding. The most rewarding thing actually is her eyes,” said Michellina. “She always had her head down. But now, when she looks at me, she has her head up and looks right into your eyes. She is such a brave girl now. I’m so proud of her!”

Lexie’s story proves that every rescue dog deserves a chance. No matter how traumatized and hesitant they seem, a little love and patience can go a long way. Now, Lexie is living her best life because kind humans decided to take a chance on her.