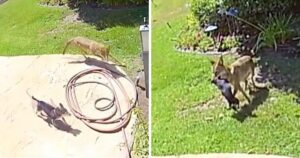 A California family is still in shock after helping their dog break free from a sudden coyote attack. The entire event was caught on home surveillance, showing the pivotal moment that saved Chico’s life.

Kerri and Larry Ruiz live in Southern California with their adorable pup named Chico.  The Ruiz family loves their beautiful home in the SoCal hills, but there is one threat they have to keep an eye out for: coyotes.

The presence of coyotes in Kerri and Larry’s neighborhood has increased over the last few years. They learned that even a high cement fence around their property can’t keep out a hunting coyote, so they always have to be on high alert. Despite the precautions the family put in place, one coyote managed to sneak into their yard unseen.

Kerri let Chico out into the backyard for a quick potty break around 11 am on the morning of the attack. Within seconds, Kerri heard her beloved pup yelping in fear of what was to come.

Kerri ran toward the backyard, catching the tail end of a coyote running off with Chico in its mouth. The coyote had the small chihuahua by the neck and was prepared to jump over the yard’s border with his prey in grasp. It was then that Kerri remembered the hand-held air horns they had placed by each door.

When the Ruiz family noticed the increase of coyotes in their area, they purchased multiple air horns to place at each door in their home. They were informed that loud noises could startle a coyote out of an attack, so they wanted to be prepared in case they ever became coyote victims. Little did they know, these air horns would save their beloved dog’s life.

Kerri immediately grabbed the nearest air horn and began blaring the horn in the direction of the coyote. The coyote had already jumped into the neighbor’s yard, but the noise was still loud enough to startle the hunting canine. The hungry coyote immediately dropped the terrified chihuahua and retreated into the woods.

Kerri and Larry rushed to Chico’s aid and brought him to the nearest vet to have him checked out. It turns out that Chico only had two punctures on his neck, both of which were not deep enough to cause serious damage. After giving him some antibiotics and pain control, Chico went home with his life intact.

Kerri and Larry have stated that they will be standing outside with Chico during every potty break from now on. They know that coyotes are simply wild animals trying to survive, so they will need to do what they can to keep their pup safe if a coyote crosses their path again.

You can watch the incredible home surveillance footage that captured the entire attack on the footage below. We are so glad that Chico made it out of this situation alive and that the family was prepared to save their furry friend from certain death.

If you live in an area with a high prevalence of coyote attacks, it may be time to purchase your own hand-held air horn!