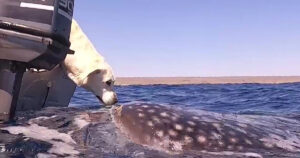 Did you know whale sharks exist on a diet of plankton and small fish? With no teeth, these big fish are filter feeders and certainly not maneaters or dog eaters! As what National Geographic describes as a “docile fish,” whale sharks don’t even mind if a diver decides to hold on and catch a ride. Truly, any of us would be in good company if we ever got the chance to meet a whale shark. Listed as an endangered species, though, it’s not likely you’ll ever encounter a whale shark.

But lucky Labrador retriever Sailor got to meet one of these gentle giants of the sea off the Australian coast. As a greeting, these two curious souls gave each other the sweetest of smoochie salutations. Lucky for us, dive instructor and dog mom Jade Pursell captured the magical moment on camera!

Jade spends a lot of time in the water, and her buddy Sailor is the best of first mates. When she hops in the water, good dog Sailor stays onboard, keeping her eyes peeled while her mom captures stunning underwater photography. And during one trip to the Ningaloo Reef, Jade was filming as a whale shark calmly cruised onto the scene, not to meet her, but her furry best friend instead.

“Sailor had never met a whale shark before,” Jade shared. “I always hoped she would but that was by far better than I had ever imagined. I was telling her not to touch it but neither of them listened to me. Sailor sniffed and kissed the shark.”

You read that right! Sailor and her 22-foot-long fishy friend met nose to nose for a hello kiss in one of the sweetest friendships we never expected to find! And what did Jade think of the moment?

“To see Sailor meet a whale shark, I honestly just felt overjoyed. Animals are incredible and it couldn’t have gone any better. I wondered if she knew or could smell that this was the animal I swim with every day. My initial worry was that she might take a leap of faith onto the shark or that she would touch it. Once the shark was so close to her I knew I had nothing to worry about.”

Jade also said she felt lucky to witness such an innocent and tender moment, saying, “To think Sailor is probably the only dog in the world to have kissed a whale shark is pretty special.”

In the cutest video, Jade narrated the meeting, giving us gold in her talk of friendly fish, little eyes, and spots! To say ‘aww‘ and enjoy a laugh, watch the video of Sailor making the acquaintance of the second biggest fish in the sea.