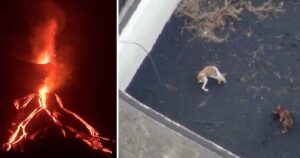 For nearly a month, the Cumbre Vieja volcano in the Canary Islands of Spain has been erupting, spewing hot lava across the area. The eruption, which started in September 2021, has destroyed over a thousand buildings and forced 6,000 residents to evacuate La Palma. Sadly, some had no choice but to leave their pets behind.

La Palma is home to 83,000 people, and many of them have furry family members. Fortunately, dogs have better survival instincts than we do. Footage from overhead shows these dogs waiting out the lava on rooftops and bridges.

Thanks to animal rescuers and government assistance, these dogs have not been suffering alone.

Helping The Dogs Without Sacrificing Lives

Due to the ongoing lava flow, approaching the dogs would be extremely dangerous. The flow is so strong, some have even referred to it as a “lava tsunami.” Changing thermal currents and ash-filled air also makes helicopter flight—and thus airlifting—impossible.

Obviously, though, people want to make sure these dogs are taken care of until the eruption stops and they can be rescued. So, under advisement from the Spanish government, two drone companies (Ticom Soluciones and Volcanic Life) have been dropping food to ensure the dogs stay healthy while they’re trapped.

Birds-eye view footage shared by the Spanish government shows the dogs gratefully accepting their meals. According to sources, veterinarians portioned out the food drops.

This may be a temporary solution, but it’s good to see so much effort put towards helping the trapped dogs. Here’s that drone footage:

The Benawara Plant and Animal Protection Society started working to help the area’s animals just before the eruptions began. They searched for potential foster homes and even converted a school playground into a coordination center.

As the volcano remains active, rescuers now have a ton of homeless animals in their care. Esau Fumero, a dog trainer and sub-director with the organization, told Reuters:

Some of these animals couldn’t enter temporary housing with their evacuating families, and others were brought to rescuers by police and samaritans. Obviously, in this time of crisis, the shelters are all full, so this extra effort is extremely valuable.

Since many families returning to the island will need to locate their missing animals when it’s safe, the group also set up a website to coordinate these reunions.

You can help out in a few ways: If you’re local, you can adopt or foster one of the animals the shelters have no room for. They also need volunteers! If you’re not local, you can donate to the rescue efforts here.