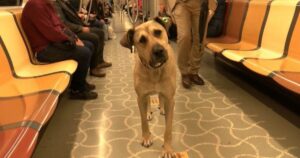 Public transportation can be tricky to navigate at first. After you’ve been switching trains and memorizing stops for a while though, it becomes second nature.

That’s what happened with Boji, a street dog in Istanbul. The Anatolian Shepherd mix takes the public transportation in his city every day, visiting all corners of Istanbul.

In Turkish, Boji refers to the middle part of the train, which is where the pup prefers to ride. Boji has even become famous for his street smarts. He lives on the rails, but he’s loved by a city of people.

The green tag on Boji’s ear indicates that he’s formally registered by the Istanbul Metropolitan Municipality. The tag gives them the ability to track his movements, and also indicates that he receives vaccines and has been neutered. Some people may shrink at the sight of a larger dog, but this furry commuter is sweet and gentle.

According to records of Boji’s trips, the dog visits at least 29 metro stations per day. His microchip has even been tracked at sea in the Princes’ Islands, where Boji presumably took a little day trip. The nomad rides trains, buses, and ferries.

Some human city dwellers probably don’t know the routes as well as Boji seems to. Plus, I’d be willing to bet most humans don’t observe the rules as well as he does: always waiting until passengers get off the train before rushing in.

The Cute Commuter Everyone Knows And Loves

It’s no surprise that a dog like this gained a lot of attention. The Istanbul Metropolitan Municipality created a Twitter account for Boji which has over 63,000 followers. Other people who run into him on the subway will snap photos with him for social media.

The Twitter account for Boji has been accused of being a PR stunt for the government, but most prefer to see it just for what it is: cute.

Regardless, he’s definitely a good role model to promote the use of public transportation. One tweet with a photo of Boji waiting for a train reads:

(Translation from Turkish) “For safety reasons I never cross the yellow line. Nor should you,”

Above all, Boji’s lifestyle shows us the value of living in the moment and appreciating what you can do. Erol explained:

“You take the train and, suddenly, you see Boji. And look at him. He lies, just like this. You just smile and catch the moment, really. This is what Boji evokes for Istanbulites. He also reminds us that we can still enjoy Istanbul as we rush about.”