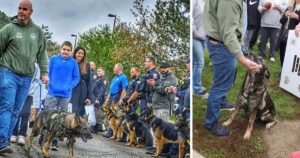 When Chicago police alerted the Kenosha County Sheriff’s Office to the sighting of a murder suspect on the run at a Bristol, Illinois, gas station, Deputy Terry Tifft and partner K9 Riggs were two of the responding officers. The suspect was driving the homicide victim’s vehicle, and when officers approached, he fled the car, brandishing a gun. Riggs went after him, tackling him to the ground before he reached the highway.

But the suspect fired on Riggs, shooting him once in the forehead. Thankfully, the bullet missed his brain. And now, just days after being shot, Riggs walked out of the hospital and into a “hero’s welcome.”

During the standoff, deputies returned fire, hitting the suspect in the abdomen and leg. The suspect underwent surgery and is recovering at a local hospital before facing charges.

Riggs was transported to the Veterinary Specialty Center in Buffalo Grove for emergency treatment. Listing him in stable condition, veterinarian Dr. Jennifer Herring gave Riggs a good prognosis after discovering the bullet entered his head and exited through the back of his skull.

Tough Pup Walks Out on His Own

Kenosha County Sheriff’s Deputies and fellow K9 officers came together outside the vet clinic to celebrate Riggs as he walked out of the hospital on his own four paws. Dr. Herring had the honor of bringing the brave dog out to meet Deputy Tifft in what the Lake Geneva Regional News described as an emotional reunion.

From there, Tifft took Riggs’ leash, and the two walked through the line of well-wishers gathered to pay tribute to a hero dog.

The department shared pictures of the touching moment on Facebook, writing:

“The KSD and many K9 Officers gathered at the Buffalo Grove Vet Clinic yesterday to welcome back K9 Riggs as he left the hospital for the first time after being shot last week.”

They also spoke of their appreciation for the community, sharing, “We are grateful for the amount of support received by surrounding agencies and the Kenosha County community.”

Deputy Tifft and Riggs have been partners since September 2014. And thanks to their efforts and the bravery of a good dog, a Chicago murder suspect is in custody. Because Riggs excels at his job, officers are safe after the harrowing arrest.

Kenosha County Sheriff David G. Beth told The Chicago Sun-Times, Riggs saved lives by stopping the suspect from getting to the highway, explaining, “Who knows if he would’ve tried to carjack someone on the highway.”

In a statement from the department, Sheriff Beth said, “Riggs is a hero and potentially saved the lives of our deputies and the public.”

Welcome back to a brave police dog who survived the bad intentions of a criminal to come home in true warrior fashion. You’re the best boy, Riggs!

The post K9 Officer Is Met With A Hero’s Welcome After Surviving A Bullet To The Head appeared first on iHeartDogs.com.