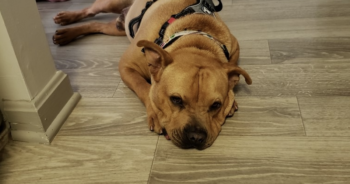 It’s hard not to get your hopes up when someone wants to meet a long-term shelter resident. Many wonderful dogs have been adoptable for months or even years. But even when people consider adopting them, it doesn’t always go through.

Hendrix from the Kentucky Humane Society has been looking for a home for a long time. So, when a potential adopter requested to meet him, everyone was ecstatic for him. Yet, the adopters stood Hendrix up with no explanation. Not only are the shelter staff heartbroken, but the pup has been moping about it too.

Hendrix has been waiting for a home at the shelter for at least ten months, making him the longest current resident. Before arriving at the Kentucky Humane Society, he had been stuck at an overcrowded rural shelter. So, he hasn’t been in a loving home in a long time.

Despite being a charming and handsome boy, Hendrix didn’t get much interest. So, he was ecstatic when some potential adopters scheduled to meet him on January 18th, 2022. Everyone thought the meeting would be a life-changing experience for the pup.

But the people never came to meet him. They didn’t tell the staff why, which left Hendrix to wonder what he did wrong. The shelter posted a picture of the pup pouting after the emotional letdown.

Will You Help Hendrix Find a Home?

So, Hendrix is still on the lookout for his forever home. He’s confident that his next meet will be the one. But in the meantime, the shelter is advertising him as much as they can.

The 4-year-old pup is about 57 pounds, and he’s a mix between a Staffordshire Bull Terrier and a Shar Pei. He’s potty trained, and he loves cuddling with humans, destroying squeaky toys, and going for walks. Hendrix is a loyal pup, but he’d prefer a home without cats or high-energy dogs. He may get along with mellow dogs, but he will need to meet them before getting adopted.

Hendrix is still heartbroken after getting stood up, but he knows his forever family is out there. If you or someone you know is interested in adopting him, you can find out more information at kyhumane.org.