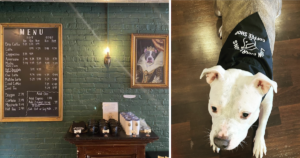 Chicago resident Naji Al-Anwar recently quit his job as a freelance sound engineer to open a small coffee shop. But this was no ordinary business. Al-Anwar hoped that his little shop would help make a difference in the world.

He and his future wife Lauren adopted their Pit Bull named Cora in 2019. They quickly saw that Friends of Chicago Animal Care and Control (FCACC) wasn’t receiving the funds or recognition it deserved. So, Al-Anwar decided to make his coffee shop a dog-themed business to help raise awareness for dogs in need. He plans to partner with the shelter in as many ways as possible.

Ludlow Charlingtons Coffee Shop recently opened in Lincoln Park in Chicago. It’s a European-style coffee shop with a small menu of beverages and pastries. It’s 800 square feet, so there’s only room for two tables and 11 counter seats. Yet, the adorable dog decorations make up for the lack of seating.

Al-Anwar’s mission is to help shelter dogs through his new business. He made Cora the company’s mascot, and he has started selling merchandise with her face on it. 50% of the merchandising sales will go to the shelter.

“I started talking with Charlie Propsom, the founder of FCACC,” Al-Anwar said, “and within five minutes of speaking with her, I realized how passionate and into the cause she was. She threw out 20 different ways we could work together.”

Right now, dogs aren’t allowed in the coffee shop, but Al-Anwar hopes they will be once he learns the city’s rules better. A dog-friendly outdoor area will be added soon. Plus, there’s always a bowl of water outside for the pups walking by.

Shelters Need So Much Support

Getting the coffee shop ready during COVID was a struggle, but now, Al-Anwar is excited to finally make his dream a reality. He already has so many ideas for how he can use his shop to help dogs find homes. He’s planning to do an adoption event outside the shop in the next month.

Shelters like FCACC always need more help than people realize. Like many shelters, they saw an increase in adoptions during the pandemic, but now they’re back to taking in more dogs than usual. Unfortunately, 10% of the dogs were euthanized in the past year, but with more support and more funding, it will be easier for them to rescue more dogs.

“At the shelter [when we adopted Cora], we saw all these dogs, mostly pit bulls. It was very sad. It’s an understaffed place. It doesn’t have great funding, and it doesn’t have great recognition like PAWS. We wanted to give back to that community,” said Al-Anwar.

Al-Anwar is still getting the hang of being a successful business owner, but he has big dreams for the future. His family is very grateful that they found their furry friend at the shelter, and they want to help more dogs like Cora. Hopefully, Ludlow Charlingtons will be the perfect way to spread awareness.