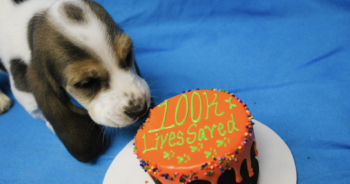 When Austin Pets Alive! began operations in 2008, the save rate of animals in Austin was only 55%. After one year of pulling dogs at risk of euthanasia from shelters, the organization helped the save rate grow to 99.72%, which is enough to make Austin a “no-kill” city. But their efforts don’t stop there.

In early 2022, Austin Pets Alive! achieved another big milestone. They just had their 100,000th dog adopted, and they will keep saving dogs until that number doubles, triples, and so on. As a bonus, their 100,000th adoption was the cutest little puppy. He’s sure to melt your heart!

The dog who helped the rescue reach their big milestone is a tiny Basset Hound puppy named Copper. At less than two months old, Copper was suffering from parvovirus, which is a disease many puppies don’t recover from. But the Parvo Puppy ICU at Austin Pets Alive! gave him the care and treatment he needed to survive.

Copper has since tested negative for parvo, making him ready to find his forever home. He was released from the parvo ward and eager to start his new life.

“Now, all that he loves in life is eating, napping, and practicing his howling. He is also learning how to avoid tripping over his ears but he hasn’t mastered that quite yet. We all love him and are so glad he is doing well!” said Alexa, one of the Parvo ICU assistants.

It’s no surprise that Copper found a forever home shortly after he went up for adoption. He has the sweetest eyes, and he’s sure to have a great life thanks to Austin Pets Alive!

Now that Copper has helped the rescue reach its 100,000 milestone, it’s time to help even more dogs find homes. They will keep saving dogs to ensure that every city can become no-kill one day. Not only do they rescue dogs from crowded shelters, but in the past, they’ve also rescued dogs from disaster situations like Hurricane Harvey.

“Cities from all over the world contact Austin to try to figure out how to not have animals die in their shelters for no reason,” said Dr. Ellen Jefferson, the president and CEO of Austin Pets Alive!

Shelters and rescues do so much to lower the kill rates of dogs and cats. Yet, the public can help just as much. If you’re able to adopt, foster, volunteer, or donate, you could be saving lives. Even just spaying/neutering or spreading the word could make shelters less crowded.

So, thank you to everyone who has adopted a dog in need. If you’re looking for more ways to help, consider donating to Austin Pets Alive!