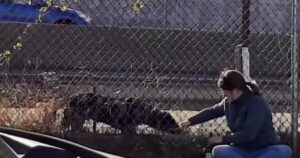 In addition to the daily struggle for basic survival, one of the biggest threats to a stray dog’s safety is fast-moving traffic. It’s not easy dodging heavy machinery traveling at 60 miles an hour.

Meanwhile, the poor dog stood terrified between the highway barrier and the chain-link fence separating it from a lot.

Patience And Wire Cutters Save The Day

After assessing the situation while traffic rushed by, rescuers knew they weren’t going to be able to approach from the highway side. Officers ultimately had to cut through the fence wires. It remains a mystery how the dog even got himself stuck in there.

They also had another obstacle: the dog’s fear. Afraid of the loud cars and unsure of the people trying to approach him, he resisted help. No one wanted him to panic and accidentally inch even closer to moving vehicles.

It took about half an hour to calm the dog down enough to help him. Cliff Ballena, sergeant of animal control for the Animal Welfare League of Arlington, explained:

“It did take a couple of treats, Vienna sausages for him to come out.”

The trick was putting dog food on a slip lead, waiting for the dog to eat, and then slowly slipping the leash over his head. From there, rescuers were able to get him into a carrier and bring him to the Animal Welfare League of Arlington.

No ID, But Clearly A Friendly Dog

Though this dog wore a collar, it didn’t contain any personal information. Based on the collar and his knowledge of commands, animal control officers remain confident this dog isn’t actually a stray; he belongs to somebody.

“You can throw the ball and he catches it right away, so he is definitely somebody’s dog.”

Sergeant Ballenga is hopeful someone will come forward to claim this dog after seeing his rescue story. If no one claims him within ten days, Virginia law mandates that he be neutered and put up for adoption.

The rescue video AWLA posted to Facebook has been viewed over 6,000 times, so hopefully, the dog’s family will see it soon too. If not, he’ll be looking for a new family through the organization.

One thing is for certain: this dog is lucky to be alive. Thank goodness for Vienna sausages.

The post Officers Cut Through Wire Fence To Save Dog Trapped Inches From Highway appeared first on iHeartDogs.com.