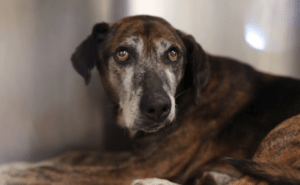 Despite being an old dog, Tony always seemed a little at odds with the world.

He was afraid of grass. He walked as if on tip toes. He forgot things.

Maybe that’s because Tony grew up in a world that he would sooner like to forget — a crumbling shelter in Israel, sharing a kennel with rocks and knee-deep mud.

But that all changed when a Canadian rescue group, Dog Tales Rescue and Sanctuary, decided to fly these ailing dogs back to its sanctuary in Ontario.

Tony was one of them.

When he arrived in Canada, Tony’s quirky charm wasn’t lost on his rescuers and, ultimately, the family who gave him a home.

“The best way to describe Tony’s personality is that he always seemed to have his head in the clouds,” Clare Forndran, media director at Dog Tales, tells iHeartDogs. “This is why we all fell so in love with him, but it is also why we were so concerned when we learned that he was lost.”

Indeed, on March 10, sweet, sensitive Tony disappeared from the home where he had been staying in Ajax, Ontario.

The search effort was epic: countless volunteers combed the area, even drones were used to scour for signs of the dog from above. Volunteers slept in their cars hoping to catch a glimpse of Tony.

“Our team had covered the entire city of Ajax in posters with Tony’s photo and information, and it truly felt as though the entire city was helping us search for him,” Forndran says.

Team Chelsea, a volunteer group that specializes in finding lost pets, joined the mission — even as hope began to fade amid the harsh Canadian winter.

On the 15th day of the search, a couple spotted Tony standing in an open field.

“They had our phone number saved, as they had spotted Tony a week prior in a completely different location,” Forndran recalls. “It was almost as though this couple was meant to play a part in his rescue.”

Rescuers rushed to the scene to find Tony, understandably, scared and confused.

“Thankfully one of our dog handlers, Cassandra, who was Tony’s best friend at our shelter, was there,” Forndran explains. “Once Tony realized that it was her he began to calm down and she was able to leash him.”

The dog fell asleep as soon as he got in the car —  as though it was the first rest he had gotten  in weeks.

“And we all began sobbing,” Forndran says.

The dog everyone thought was too sensitive to survive on his own had shown the world a new trick: how to survive against all odds.

“When we found Tony, it looked as though he hadn’t eaten for the full 15 days,” Forndran says. “He was taken directly to the vet and we found that his stomach was full of rocks and bones.”

Gradually Tony got better. Those hard things that lined his belly were no match for the warmth of human kindness that poured into his heart.

That surprisingly mighty heart gave it all back.

“He’s back to his usual sweet, quirky self,” Forndran notes.

And back with people who love him — for all his strange and beautiful ways.

The post Old Dog Survived On Rocks And Bones For 15 Days Waiting For Someone To Save Him appeared first on iHeartDogs.com.