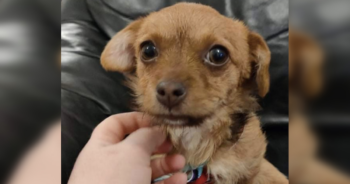 Gem, the teacup Chihuahua, weighs only 5.5 pounds. Normally, a dog that tiny would be in high demand, but Gem is struggling to find a place to call home. Animal lovers suspect that a heartless person hit Gem when she was only a young puppy, causing permanent paralysis in her lower half. But the Chihuahua hasn’t let that hold her back.

A special needs dog might sound like a lot of work to many dog parents, but rescue volunteers insist that Gem isn’t high maintenance. She’s just a happy, energetic puppy who has a few unique needs. So, why is she struggling to get adopted?

Flori’s Friends Rescue in the UK is currently caring for Gem. When she arrived, she needed surgery to remove her back legs after being hit in the spine. Now, at about six or seven months old, Gem has recovered enough to go up for adoption.

The rescue got Gem a custom pink wheelchair to help her run around outside. She also has custom-made indoor playsuits for getting around the house. Her injury made her incontinent, so she needs to wear a diaper and have her bladder emptied several times a day.

Despite the challenges that her disability brings, Gem is a playful, energetic pup. The rescue says she has the personality of a big dog in a small dog’s body. She loves running around outside and playing with other canines. To her, she’s no different than any other dog. But despite how lovable she is, she hasn’t had anyone interested in adopting her yet.

“She just isn’t getting any attention, and people seem to miss her,” said Natalia George with Flori’s Friends Rescue.

Help this Pup Get Adopted!

It’s unclear if it’s Gem’s size or her disability that’s making people overlook her, but it’s likely a little bit of both. She’s about the size of a guinea pig, but she’s very social. The rescue wants to make sure she goes to a home that has another dog she can play with. She also gets along with cats, but she would do best in a home without young kids since she can be mouthy when she plays.

Gem’s adopters will need to be comfortable with changing her diaper and emptying her bladder. Yet, the rescue is happy to teach applicants how to do those tasks. Her adopters don’t need to have any experience caring for a disabled dog. They just need to have big hearts and a willingness to learn.

“Of course, all training will be provided by us so adopters feel fully supported and ready to roll with her daily care,” said George.

Despite being unique, Gem is an easy, loving dog to have around. She just needs the right family to come along. If you think that could be you, visit the rescue’s website for more information!