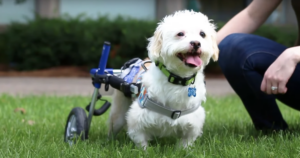 Teddy came from Iran to the United States just before the CDC’s pet travel ban took place. He used to be able to walk, but he was severely injured after being abused by his previous human’s boyfriend. It didn’t sound like a one-time incident either.

So, Teddy was transported to PAWS New England in Boston, where they discovered that he had a severe spinal injury. Poor Teddy is paralyzed in his back legs, but he doesn’t let that hold him back. He’s a happy, energetic dog who wants a forever family to give him the love he deserves.

Teddy is a young Maltese mix that weighs about 22 pounds. PAWS New England got him fitted for a wheelchair through Walkin’ Pets to help him move around easier. He could already move quickly by dragging his legs behind him, but the wheelchair helped him spring to life even more.

“When he got his wheels, he was happier. Teddy doesn’t realize there’s anything different about him. He acts just like any other dog! He deserves to have the same opportunities,” said Leila Williams, Teddy’s foster mom.

As much as Teddy loves his wheelchair, canine rehabilitation specialists are optimistic that he will one day regain function in his back legs. Either way, he will be as happy as can be.

To help him with his mobility, he will still have to attend physical therapy for 6 to 12 months. The rescue will happily cover 50% of those expenses if he gets adopted during that time. In certain cases, they may offer 100% coverage, but they would love to have the extra money to help other animals in need.

Teddy is a special pup who deserves a loving home. The rescue shared a long, comical description of him on their website, making it sound like it’s from his point of view.

“Howdy – My name is Teddy and I am originally from Iran, yes, Iran!! Far away and let me tell you it was a long trip getting here. Some nice woman Yasi comes to Iran and bring as many of us awesome “special” (not sure what they mean by that, assuming smart and cute?) dogs back with her to people in the USA to help us,” ‘Teddy’ wrote. “Also, a couple of my friends were talking about this place called America where dogs are given non-stop belly rubs and snuggles so I decided to tag along!”

Teddy would love an active household where he can have another canine companion to play with. Otherwise, he would enjoy visiting doggy daycare or the dog park. He prefers going for walks over hanging out in the yard, and he can keep up better than you’d think! He has no problem wheeling down the street or even through the grass. Teddy isn’t incontinent, but he will need his bladder expressed, which the rescue says is an easy skill to learn.

If you’re interested in adopting Teddy, visit his full profile!

The post Paralyzed Pup From Iran Searches For Loving Home In His New Wheelchair appeared first on iHeartDogs.com.