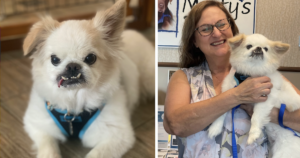 Rex, the 14-year-old Pekingese mix, is adorable in his own unique way. He has an extreme underbite and a tongue that hangs out on one side. It’s hard to imagine how anyone could resist his sweet face, but he was once abandoned only because of his age. His family gave him up because he wasn’t a tiny puppy anymore, which is incredibly unfair.

Senior dogs are some of the most loving companions you can have. So, there were plenty of dog lovers who stepped up to save Rex’s life. Now, he’s in a happy forever home where he advocates for other senior dogs in shelters.

From Unwanted to Forever Loved

A woman found Rex wandering around New York City, so she contacted Marty’s Place Senior Dog Sanctuary. The New Jersey nonprofit takes in older dogs and gives them a loving place to stay for as long as needed. They gladly took Rex in, and as it turns out, he had a microchip.

When the rescue staff contacted Rex’s family, they expected a heartwarming reunion. But instead, his humans admitted to abandoning him because he was “too old.” They didn’t want him back, and it’s heartbreaking that they left him on the streets instead of surrendering him to a rescue.

“It’s one of the best decisions I’ve made in a very, very long time,” said Buck.

Rex is still a playful, curious dog. He loves going for walks, but he takes a lot of time to sniff along the way. He has some hearing loss, missing teeth, and mild allergies, but other than that, he’s very healthy and lively for his age.

Take a Chance on Senior Dogs!

Rex adores his new home, and Buck is so happy to have him around. She can’t believe that someone abandoned him, so she constantly encourages others to adopt senior dogs.

“Every ounce of love you give them, you get back tenfold,” Buck said. “Knowing you’re making an impact in a senior’s last years is just an incredible privilege.”

Now, Rex is an ambassador for Saving Senior Dogs Week. It’s an awareness campaign from October 25th to the 31st, which focuses on the rewards of adopting a senior dog. Many supporters share success stories while shelters and rescues advertise their adoptable senior dogs.

Senior dogs are some of the most overlooked dogs at rescues. But when you adopt them, they’re the most grateful, loving friends you could ask for. So, all the adoptable senior dogs out there deserve a second chance like Rex. And it’s important to remember that dogs are family members for life, not just during their youthful years.

The post Quirky Dog Abandoned For Being “Too Old” Now Educates Others appeared first on iHeartDogs.com.