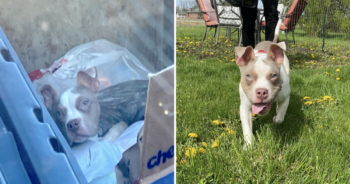 David Carlson, a refuse operator, was emptying the garbage bins at an Ohio apartment complex when he noticed something unusual. He saw a puppy in one of the bins, struggling underneath trash bags. Carlson had no idea what to do, but he knew he couldn’t leave the dog like that.

The puppy is a 6-month-old Pit Bull who’s very loving despite his abandonment. Carlson did the right thing and helped free the puppy from the dumpster. Now, the puppy will finally get the life of love he deserves!

After finding the puppy in the dumpster, Carlson called his supervisor, Logan Sieg, to find out what to do. Sieg came to the apartment complex and climbed into the trash bin to rescue the puppy. The puppy was happy to accept help.

“It’s shocking seeing a dog in the dumpster. It’s not something you usually see. You know they don’t belong there,” Sieg said. “It was upsetting to see someone just throw [him] in there and get rid of [him] like that.”

Carlson and Sieg reached out to the Franklin County Dog Shelter, which was able to take the puppy into their care. The puppy did well at the shelter, and it’s all thanks to the kind workers. Carlson and Sieg went above and beyond to ensure that this dog survived.

Shortly after the puppy went up for adoption, he found the perfect family!

Brandon Dawson and his wife adopted the Pit Bull puppy and named him Duke. They described the moment as a “love at first sight kind of thing.” As soon as they saw him at the shelter, he jumped up to hug them. Right away, they knew they couldn’t leave the shelter without him.

RELATED: Pregnant Pit Bull Discarded In A Dumpster Is Rescued In Time To Give Birth In Safety

Duke is such a spirited young dog, so his humans are heartbroken that he had an unfortunate past. Duke is still recovering from the incident. He has several cuts and sores on his paws, along with some urine burns from having to lay in his own urine. It’s unclear who owned him before he ended up in the dumpster, but they clearly weren’t nice to him.

“He has full potential to live a healthy, long life and for someone to take that away from him is cruel and wrong,” Dawson said.

Dawson is grateful that Carlson found Duke before it was too late. The refuse operator’s detection skills saved Duke’s life and gave him a second chance at happiness. What a lucky pup!