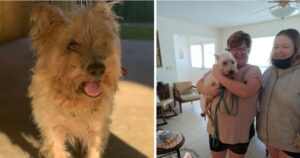 You’ve probably heard the story before of a dog escaping through an open gate and disappearing. This version of that story has a pretty positive and incredible ending, though. It’s about a dog named Sparky from Palm Beach Florida who was missing for an entire year.

Sparky’s slip through the gate and subsequent disappearance happened in October of 2020. The dog was already in his senior years at 15-years-old, and his devastated family assumed after a certain point that they’d never see him again.

Though they looked continuously in the weeks following Sparky’s escape, no one could find him. Lisa Raulerson told WPTV News Sparky’s disappearance dealt a huge blow to her family:

“My husband passed away 11 years ago and he was with us through all that, so he’s been a big part of our family.”

After putting up flyers and even offering a reward to no avail, the heartbroken family assumed the worst. As Raulerson put it:

“We pretty much figured he passed away. It was sad because he was part of us and we talked about him everyday.”

A “Stray” Pulled From The Shelter

In September of 2021, Sunshine State Westie Rescue took notice of a stray West Highland Terrier whose time at the local shelter was running out. That little Westie, as it turns out, was actually the missing Sparky.

Sparky had a microchip, but the chip was never registered, so Animal Control couldn’t locate his family. Sunshine State Westie Rescue pulled Sparky from the shelter just before his last allotted day there.

When the rescue first got ahold of Sparky, he was dirty and matted. They posted about the senior dog on their Facebook page, telling interested adopters to stay tuned while they got him cleaned up and checked out.

The rescue had no idea the dog they pulled from the shelter actually had a family missing him very much. But miraculously, Raulerson came across her dog’s photograph on the rescue’s page. She knew right away that this was Sparky.

“I didn’t even start scrolling. There was a picture of a dog that looked like Sparky.”

Microchip Your Dogs And Register The Chip!

Sunshine State Westie Rescue happily updated their followers with the news that the stray they just pulled from a shelter actually had been missed this whole time. They used the opportunity to also remind pet parents to keep their pets’ chips updated.

“We are telling you his story to show you that you should never give up if your dog goes missing. Keep your posts about your missing dog updated, keep the information with the shelter up to date. You just never know what could happen. Most importantly, microchip your dog or cat, and register that chip!”

Who knows what Sparky got up to during that year his whereabouts were unknown. Incredibly though, he’s safe, clean, and happy to be home with his family. An overjoyed Raulerson shared:

“I feel like a void in my heart was filled I really do. I never thought I’d see him again but here he is. I wish he could talk.”

Microchipping your pets is not only easy, it’s clearly necessary. Don’t forget that you also have to register the proper information to your dog’s chip and keep it updated. You never know when miracles like this can happen!

The post Rescue Pulls A “Stray” From A Kill Shelter Unaware He’d Been Missing For A Year appeared first on iHeartDogs.com.