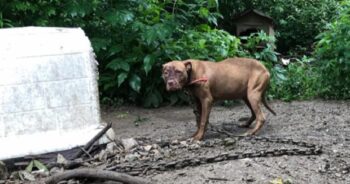 When rescuers arrived on scene and saw that 16 dogs were inhumanly chained up in the woods and living in horrific conditions, they knew exactly what they needed to do.

Being left alone without any food, water, or proper shelter motivated Kansas Animal Services to prioritize doing whatever it took to free every pup from their heavy chains and get them to safety.

After obtaining a search warrant, investigators were finally able to inspect the location where the pups were abandoned. It’s nestled a quarter of a mile into the Kansas City woods.

And while they weren’t anticipating things to be “picture perfect” when they arrived, the scene they witnessed could only be described as shocking and cruel.

Not only were all 16 dogs bound with tight collars and heavy chains, but they were left without food, water, or adequate shelter. All of their “dog houses” were dilapidated and falling apart, and all of them had injuries from the way they were tied.

Plus, not only were they collared too tightly and left all alone in the woods, but every one of them was suffering the effects of extreme neglect.

“We knew that we could not leave these guys behind. There is no way these animals were getting adequate shelter. The dog houses were falling apart. They were standing in several inches of mud and water. They had no food and no water,” said Ashley Scott, KCK Animal Services Director.

Once the investigators contacted KCK Animal Services, volunteers were eager to get to the area and help escort all 16 dogs to safety. But getting that far into the woods and back to the shelter wasn’t the easiest endeavor.

Rescuers were forced to abandon military-grade ATVs and hike into the muddy wilderness on foot. But rescuing those sweet pups made all 16 separate trips worthwhile.

After hiking about half a mile through the difficult terrain, the rescuers and dogs met up with the ATVs and rode the rest of the way back to the shelter.

Now, all of the dogs are safe and sound with KCK Animal Services. Sadly, 10 out of the 16 tested heartworm positive. Once they have all been treated, have had a chance to heal from their wounds, and are spayed and neutered, these sweet pups will be ready to find new homes.

“They were so happy to be out of that environment. They’ve given nothing but love to us so far,” Scott said. “They are all very sweet and very gentle even with other animals.”

The Facebook group Friends of KCK Animal Services is collecting donations for the dogs’ medical care.

“This is why I do what I do. We can take an animal living in those conditions with no love, and they are resilient and forgiving even when they shouldn’t be,” Scott said. “We can try to give them the best life that they should have always had.”

Here’s hoping the dogs recover quickly so they can finally experience the love-filled lives they deserve.

The post Rescuers Discover 16 Dogs Chained Deep In The Woods Without Food, Water Or Shelter appeared first on iHeartDogs.com.