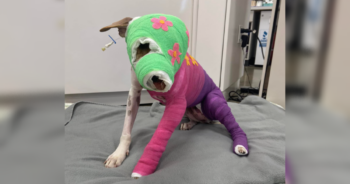 Earlier this week, members of a Memphis, Tennessee, neighborhood ran out into the streets to find an absolutely harrowing scene: a young dog, screaming in agony, running full-speed down the road on fire. Burning flames floating atop her body, neighbors ran to her rescue with garden hoses and buckets of pool water, attempting to put out the roaring blaze.

The Memphis Police Department was immediately called to the scene, and the injured pup, since named Riona, was taken to Bluff City Veterinary Specialists in critical condition. Staff reported that over 60% of Riona’s body surface was covered in burns, with fourth-degree burns on her face and neck and first-degree burns on the rest of her body.

It seemed as though Riona was set on fire purposefully, as the staff at Bluff City Veterinary reported that her fur was saturated with the smell of diesel fuel. They also noted a ligature mark around her neck, indicating that someone had attempted to strangle her.

Those involved in the initial rescue had not seen the dog before, though the many old and faded scars on her body indicated that she had suffered a lifetime of abuse at the hands of some unknown monster. Riona is thought to be just one year of age.

Custody of Riona was granted to Tails of Hope Dog Rescue, a Memphis-based organization specializing in rescuing abused, abandoned, and neglected dogs. She is currently hospitalized at Bluff City Veterinary, where she is receiving heavy doses of pain medications and antibiotics.

A large portion of Riona’s body is covered in bandages that must be changed twice daily. The Memphis Police Department is relentlessly persuing any information that may lead to an arrest of the person or persons responsible for this heinous crime. In fact, Tails of Hope has raised enough money to offer a $2500 reward for any information that leads to an arrest.

Staff at Bluff City Veterinary Specialists report that, despite the unspeakable horrors she has faced, Riona has the sweetest personality and shows nothing but love to visitors:

“Riona is so loving to humans despite what a human did to her. Dogs are so much better than us.” – Tails of Hope

Riona is expected to recover fully, though veterinary staff estimates that it may take two or more months. In the meantime, Tails of Hope Rescue is accepting donations towards the cost of her medical bills. We wish Riona a speedy recovery and sincerely hope that the absolute monster who did this is brought to justice swiftly.