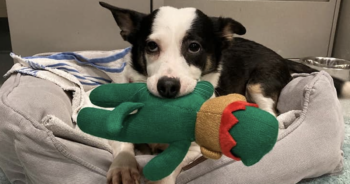 Someone found an innocent Corgi Mix abandoned at a construction site in Brookline, Massachusetts. They heard barking coming from an unusual place, so they called the police, which likely saved the dog’s life.

The 22-pound dog had been inside a mop bucket box that was taped shut inside a Porta Potty. Luckily, the dog was fine since someone found her in time. But she is terrified and trying to decompress from the stressful situation. Police are determined to find the person responsible.

Abandoned in an Elaborate Way

When officials arrived at the scene, the dog had managed to free her front legs from the box, but she was still trapped inside. They brought her to the Angell Animal Medical Center for further evaluation. Vets confirmed that the dog is healthy despite everything, so MSPCA-Angell took her in.

“The dog is unharmed and stable, but frightened — and is now resting at the MSPCA’s Jamaica Plain adoption center,” the humane society wrote on social media.

At first, the dog seemed very worried, but she’s starting to come around. After a few days of care, she seemed much sweeter and more relaxed. She has been kind and loving to the people caring for her, and they think she’s about five years old.

Mike Keiley, an MSPCA spokesperson, said their next goal is to help this dog get to a place where she’ll never be abandoned again. They never want her to feel that fear and discomfort ever again.

Help This Pup Get Justice!

The dog didn’t have a collar, identification tag, or microchip. The humane society will wait one week for the dog’s owner to reach out, and if they don’t come forward, she’ll be put up for adoption. Several people on social media have already expressed interest in adopting her.

“These situations are always perplexing to us and disheartening for us to see,” said Keiley. “That’s a scary experience for an animal to go through. I think certainly in the wintertime, especially the cold plays a factor in addition to the other parts that are dangerous for the animal.”

This situation happened near Colchester Street in Brookline. Detectives are reaching out to residents in the area to see if they have any security footage related to the dog’s abandonment. If anyone knows something about the dog or the owner, they can contact the Brookline Police Department at (617) 730- 2730 or the MSPCA at (800) 522-6008.

The post Sealed In A Box Inside A Porta Potty, This Dog Is Lucky To Be Alive appeared first on iHeartDogs.com.