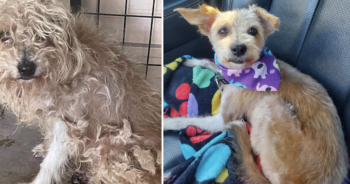 Several months ago, someone reported severe neglect of a senior dog. A dog known as Mia was shoved in a tiny plastic crate and left on her owner’s porch when they went on vacation. She had no food or water, and the crate temperature went above 80 degrees. Sadly, based on her appearance, this wasn’t the first abuse incident.

Luckily, a group of caring animal rescuers saved her. They’ve done their best to give her a loving, stress-free environment, but her trauma will always affect her to some extent.

Mia spent at least six hours in that tiny cage. It’s suspected that she was used as a breeding dog. If a neighbor hadn’t called for help, the dog could’ve died before her owners returned. Mia was emaciated and severely matted with rotten teeth. She would need lots of medical attention to get back to a healthy state.

“Mia was not able to stand. She was shaking profusely,” said Renee Habart, who is fostering Mia.

Habart fosters Mia through Rescue Me Pawsome Style in Medina, Ohio. The rescue takes in dogs from shelters that run out of space. Even though Mia is making great progress in her foster home, Habart says that every day is a big step for her. She has a lot of trauma to overcome.

“I am very lucky to have her here. She has just been a true joy, to watch her learn how to be a dog,” Habart said.

Luckily, police quickly acted on this neglect case. Mia’s former owner was charged with several fines, along with probation that prohibits them from owning animals. For Habart, it’s a sigh of relief after months of writing letters and making phone calls to give Mia justice.

Mia is now a healthy weight, and she’s starting to socialize with people more. However, Habart believes that Mia’s abuse will always affect her, no matter how much progress she makes. But that won’t stop Habart from giving her endless love and comfort.

“I don’t think the abuse ever leaves them. They might forget about it for a little while, but you can look in her eyes and see it. It never goes away,” said Habart.

Habart will foster Mia permanently. So, she’ll live the remainder of her life in a loving home, where she’ll never be taken advantage of again. She may never fully trust humans, but she will continue to grow every day.